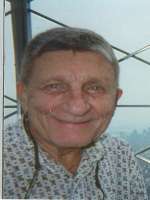 George Nickas passed away at home on November 22, 2011. George was born on April 20, 1933 in Chicago to Mike and Bessie Nickas. He attended school in Maywood, IL, graduating from Proviso High School in 1951. At that time, he was the recipient of a Rector Scholarship to DePauw University. Upon graduating from DePauw, George was initiated into Phi Beta Kappa and entered University of Illinois Medical School. After receiving his medical degree in 1955, he interned at Illinois Central Hospital before entering the U.S. Navy as a medical officer. His naval service took him to Yokohama, Japan. It was here that he met Kathie Siegel, a teacher in the Navy Dependents’ School. George and Kathie were married in Yokohama on May 5, 1962.
Upon returning to the States, the young couple moved to Phoenix in the summer of 1962, where George completed his residency in Internal Medicine at St. Joseph’s Hospital. It was during this time that their first son was born. The family moved to Denver in 1965 where George took his fellowship in the young field of nephrology, the study of kidney disease. It was here that they welcomed their daughter. In 1966, they returned to Phoenix and he entered private practice in nephrology. He and his medical group pioneered the care of kidney dialysis and transplant patients in Arizona. In 1968, the last of the Nickas children arrived—another son. After retiring from private practice in 1990, George enrolled at ASU where he studied music, art, and history. Always an accomplished pianist, he developed his voice as well and sang in several choirs throughout his retirement years. Summers with the choirs brought him the opportunity to sing once in Carnegie Hall, and around the world, including Australia, Greece, and Italy. The things that George most enjoyed throughout his life were his family, his medical practice and his music. Surviving George are his wife, Kathie, and his children Mike (May Yen), Gigi (Tim) and Mark (Kristine). He also leaves five beloved grandchildren: Bereket, Monalisa, Daniel, William and Matthew. In addition, he is survived by his sister, Grace Russell. His Memorial Mass will be held Thursday, December 1, at 10 AM at St. Francis Xavier Catholic Church, 4715 N. Central Avenue, Phoenix. In lieu of flowers, donations may be made to St. Francis Elementary School Scholarship Fund or Doctors without Borders.

Offer Hugs From Home Condolence for the family of NICKAS, GEORGE MICHAEL , M.D.