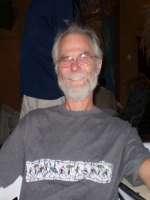 Mark Allen Niver crossed his last finish line a winner on July 11, 2010 in Seattle, WA. Mark was a kind and loving man who had a passion for his family, his sport, and his life like no other. Born on January 13, 1950, in Norwalk, Ohio, he is survived by his wife Tanis, his 2 daughters, Cory (Ron) Johnson and Samantha West and 4 grandchildren, Cody, Jessica, Alexis and Angelina. Mark is also survived by his mother; Clara, brothers; Keith, Randall and Gary and his sister, Laurie. He leaves behind a host of extended family by marriage and the racing community throughout the country. Mark was the owner operator of Billet Machine. Known and respected as an ethical businessman, gracious competitor and a meticulous craftsman; he was a leading machinist in the valley for over thirty years. He had a great love for creating things with his hands; a true innovator. Mark had a lifelong passion for drag racing, and he spent countless hours crafting parts for his racecar. He cherished this sport; because it was one he enjoyed with all of his family. Mark and Tanis loved to travel with family and friends, especially to Hawaii. In our hearts he will always be “King of the World!”

Offer Hugs From Home Condolence for the family of NIVER, MARK