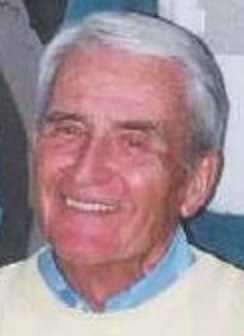 Dr. John A. Noel, “Daddo” passed away peacefully on December 21, 2016. He was 99 years old and a parishioner at St. Theresa in Phoenix, Arizona and Sacred Heart in Lancaster, Pennsylvania. He loved Notre Dame football, college wrestling, reading and a tough cross-word puzzle. John was preceded in death by his father Larry Noel, mother Emma Buckwalter Noel, wife Yvonne Gardner Noel, his brothers Larry and Tom and his sisters Kathleen and Ann. He is survived by his three sons Greg (Gina), Andy (Betsy) and Steve (Donna), his second wife Virginia and her daughter Lynn (Rod), his three grandchildren Jonathan, Amanda and Peter and his two step grandchildren Walker and Shannon. John was born in Pittsburgh, PA in 1917 and moved to Lancaster, PA at an early age. During the Depression he went to live with Dr. Gregory and Margaret Noel Chadman after his mother passed. While in Lancaster, he attended Boys High (McCaskey) and Franklin & Marshall College. With less than a year to go to graduate, he joined the Army Air Corp and served with the 92nd Bomb Group in England, eventually serving as the Field Executive Officer. Following WWII, he completed his undergraduate degree at Mt. Saint Mary’s College in Maryland, then graduated from the University of Maryland dental school in 1951. He practiced dentistry in Lancaster into his 70’s when he retired after sharing dental office space with the late Dr. Anthony Patterson. Following Yvonne’s passing in 1996, he moved to Phoenix, Arizona and lived with his son Steve until he married Virginia Klemme. He is survived by numerous nieces, nephews and step-grandchildren living throughout the country. His family would like to thank Hospice of the Valley and Home Away from Home for their loving care. A Funeral Mass will be celebrated on Thursday, January 5, 2017 at 10:00 am at Saint Theresa Parish, 5045 East Thomas Road, Phoenix, 85018. He will be interred in Lancaster, PA at a later date this spring. In lieu of flowers, please send a contribution in his name to the Hospice of the Valley or the Franklin & Marshall wrestling program.

Offer Hugs From Home Condolence for the family of NOEL, DR. JOHN A.