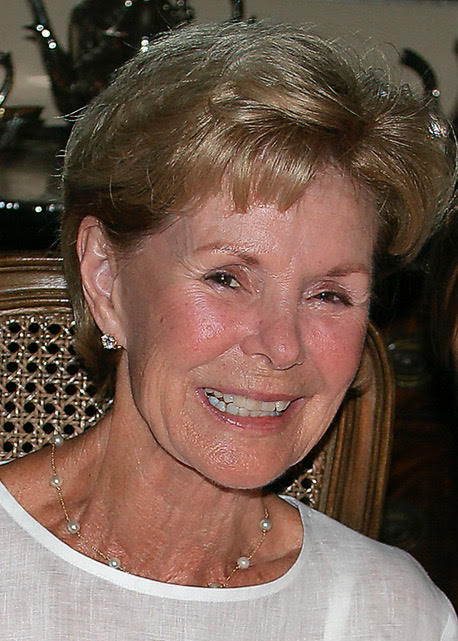 Our beloved Doris Norton passed away December 16, 2021 at her home in Paradise Valley, AZ surrounded by her loving family. She was born September 9, 1927 in Sioux Falls, SD to Anna Lydia Hartig and Gustav Reinholt Schaefer. Following her high school graduation, the family moved to Phoenix, AZ, which she referred to as the beginning of her life.
Doris attended the University of Arizona, pledged Kappa Gamma, was crowned the U of A Citrus Queen and while on a date with one fellow met her future husband, John R. Norton. They married in 1950. After John’s service to our country in 1955, they settled in Blythe, CA, to raise crops and a family adding sons: Michael, John and daughter Melanie prior returning to Phoenix in 1972.
In 1985 after serving on President-Elect Ronald Reagan’s transition team, John was appointed Deputy Secretary of the United States Department of Agriculture and they were off to Washington DC. Doris supported John and worked in the White House assisting FLOTUS, Nancy Reagan.
Together Doris and John were fortunate to travel the world visiting over 70 countries in every continent all while giving back to their community.
Subsequent to the many gifts made by John & Doris together, Doris’ gifts to St. Joseph’s Foundation, Phoenix Children’s Hospital, Creighton University and the Arizona Humane Society were a very special part of her life after John’s passing in 2016. The many other gifts include: John and Doris Norton Healing Garden at St. Joseph’s Hospital, the John and Doris Norton School of Family and Consumer Sciences, the University of Arizona, endowment of the Norton Gallery at the Phoenix Art Museum, and in 2014 their transformational gift to St. Joseph’s Foundation establishing the John and Doris Norton Cardiothoracic and Transplantation Institute. Doris served as Co-chair for Campaign Cornerstones, U of A, and was a life member of the Women’s Board of Barrow Neurological Foundation.
With the founding of the Norton Foundation, supporting charitable, educational and scientific purposes, Doris and John have left a legacy benefiting the community they loved.
She is survived by daughter Melanie Norton; sons, John Norton (wife, Lillian) Michael Norton (wife, Kathleen); granddaughters Allison Rolfes (husband, Timothy) and Melissa Norton; great grandson William John Rolfes and her devoted caregivers.

A Visitation will be held at Whitney & Murphy Funeral Home, 4800 E. Indian School Road, Phoenix on Wednesday, December 22, 2021 from 5:00-7:00PM.
Doris will be laid to rest next to John in a private family committal at Paradise Memorial Gardens in Scottsdale.
Memorial contributions in her memory may be made to: St. Josephs Foundation (designation Norton Thoracic Institute), 124 W. Thomas Road, Suite 250, Phoenix, AZ 85013 or Phoenix Children’s Hospital Foundation, 2929 E. Camelback Rd., Suite 122, Phoenix, AZ 85016. Condolences may be expressed at www.whitneymurphyfuneralhome.com.

“ If happy little bluebirds fly above the rainbow, why then, oh why can’t I”

Offer Hugs From Home Condolence for the family of NORTON, DORIS