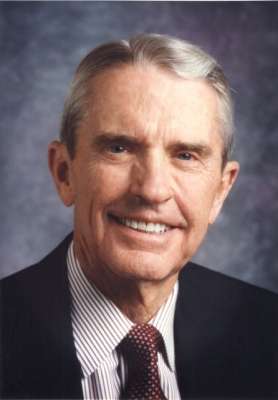 Raised in Phoenix, he graduated from North High, attended Stanford for one year and graduated in 1950 from the U of A with a B.S. in Agriculture. While attending the U of A, he was a member of the Sigma Chi Fraternity and Captain of the U of A Rodeo Team, where he roped calves, rode bulls, steer wrestled and lassoed the heart of the U of A Citrus Queen, Doris Schaefer. They married and after serving our country as a 1st Lt. in the U.S. Air Force, moved to Blythe, CA. There he founded the J.R. Norton Company, a diverse agricultural and cattle ranching operation with production in both California and Arizona.

In 1972, with the size of the family increased by children: Michael, John and Melanie, they returned to Phoenix. Business interests lead him to serve on and or Chair many Boards, such as Ready Pac Produce, Western Growers Association, United Fresh Fruit and Vegetable Association, to name a few.

In 1980, President-elect Ronald Reagan selected him for his transition team.  In 1985, John went to Washington, D.C. as Deputy Secretary of the United States Department of Agriculture.

Subsequently, he served as Director for several companies, including Shamrock Foods, America West, Arizona Public Service, Ramada Corporation, Pinnacle West, Sun Cor and the Apollo Group. He chaired the Goldwater Institute Board of Directors and was a Member of the Board of Overseers of the Hoover Institution.

He was named Produce Man of the Year in 1983, named Honorary Doctor of Laws, Entrepreneurial Fellow at the Karl Eller Center for the study of Private Market Economy, College of Business, 1984 and in 1998, the U of A “Bear Down” Alumnus Award was bestowed on him. With membership in YPO and CPO, John and Doris were well traveled, prompting a keen interest in photography, in which, it turns out, he excelled! His works were collected by the National Geographic Society, Banner Health and appeared in publications such as Camelback, Sacred Mountain in Phoenix, and are displayed at the U of A, St. Joseph’s Hospital and various private collections. The Norton’s collaborated with the U of A Center for Creative Photography and endowed the Norton Gallery at the Phoenix Art Museum.

Their other gifts to the community include the John and Doris Norton Healing Garden at St. Joseph’s in 2006, establishment of the John and Doris Norton School of Family and Consumer Sciences.   He endowed a Chair at the U of A in the School for Fathers, Parenting and Families with the John Norton Endowed Chair for Prostate Cancer Research at the U of A in 2008. He also established the Norton Scholarship Endowment Fund at Creighton University School of Medicine at St. Joseph’s, 2011.

In 2014 their historic gift to the St. Joseph’s Foundation established the John and Doris Norton Cardiothoracic and Transplantation Institute enabling recruitment of the most exceptional specialists in lung transplantation, disease and diagnosis, esophageal disease diagnosis and treatment. And with the founding of the Norton Foundation, charitable educational and scientific purposes will be the Norton’s legacy, benefiting the community they loved for many generations.

Further, John was a licensed pilot with commercial, multi-engine and instrument ratings. He served nationally on the Board of the Smithsonian Institution and locally as a Director for the Museum of Science and Technology, Phoenix Art Museum and as Trustee for the Heard Museum.

Memorial Service will be at 10:00 AM, Friday, April 29, 2016 at All Saints’ Episcopal Church, 6300 N. Central Avenue, Phoenix, AZ. A private family committal was held at Paradise Memorial Gardens in Scottsdale.

Memorial contributions in John’s memory may be made to:

c/o The John and Doris Norton

The John and Doris Norton

School of Family and Consumer Sciences

c/o The University of Arizona

Offer Hugs From Home Condolence for the family of NORTON, JOHN R. III