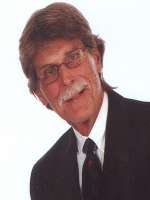 passed away peacefully at home on January 1, 2011 at the age of 71. His wife Beverly, the love of his life for more than 26 years, was at his side. He served in the United States Marine Corps for four years, and worked in the technology industry for more than 35 years. Upon retirement approximately seven years ago he became a part-time real estate agent and an officer with the Phoenix Elks Club. His work history does not identify who Ed was. What defines Ed is his family. He enjoyed road trips to California with his children, taking cruises with his wife and friends; however his greatest joy was being a proud Papa to his grandchildren. He is survived by his loving wife, Beverly, six children, Janet (Rich), Cathy (Richard), Marjorie (Mike), Anthony (Amy), David (Cristy) and Kari (Sean), 10 grandchildren (Miranda, Nick, Sarah, Colin, Nathan, Rachel, Zach, Tessa, Cooper and Jasper), his brother Bob, and his sister Penny. He and Beverly had a marriage that most couples only dream about. It included respect, friendship, commitment, patience and above all love. He and Beverly set the bar high to have their children’s marriages equal theirs. A Visitation will be held Wednesday, January 5, 2011 from 6:00 – 8:30 P.M. at Whitney & Murphy Funeral Home, 4800 E. Indian School Rd., Phoenix, AZ. A Memorial Service will be held on Thursday, January 6, 2011 at 10:00 A.M. at Gloria Dei Luther Church, 3539 E. Stanford Dr., Paradise Valley, AZ. In lieu of flowers, and in honor of the love that Ed had for his ten grandchildren, please feel free to make donations in his name to Phoenix Children’s Hospital at http://www.phoenixchildrens.com. Ed husband, father, friend and Papa, we miss you!

Offer Hugs From Home Condolence for the family of NUGENT, EDWARD ROBERT