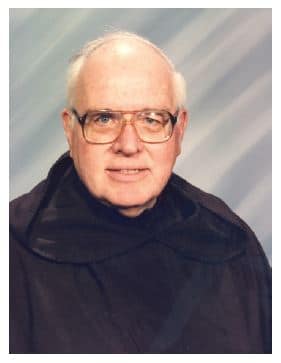 Tiernan was born to (the late) John Russell O’Callaghan and (the late) Nora Francis (Connolly) O’Callaghan on August 31, 1931, in Boston Massachusetts. His given name at baptism was John Russell. He is survived by his cousins Patricia Coleman, Marguerite Clifford, John Barrett and Rita Hussey.

John Russell attended Carmelite Junior Seminary in Hamilton, Massachusetts, and entered the Carmelite novitiate in New Baltimore, Pennsylvania, in 1949. He professed simple vows on August 30, 1950, taking the religious name of Tiernan. He attended Mount Carmel College in Niagara Falls, Ontario, and St. Bonaventure University in Olean, New York, earning a bachelor’s degree in philosophy. He studied theology at the Catholic University of America in Washington, DC, for four years, and professed solemn vows with the Carmelites at Whitefriars Hall on May 26, 1954. He was ordained a Carmelite priest on May 26, 1956, in Hamilton, Massachusetts. He continued further studies at the University of Houston in Houston, Texas; Spalding University in Louisville, Kentucky; and Seton Hall University in South Orange, New Jersey, where he earned a M.Div. in theology.

Father Tiernan’s first assignment was teaching at Mount Carmel High School in Houston, Texas, from 1957 to 1960. He then moved to DeSales High School in Louisville, Kentucky, where he taught until 1971. His next assignment was teaching at Joliet Catholic High School in Joliet, Illinois, where he served from 1971 to 1976. From 1976 to 1989 he served at St. Thérèse Parish in Cresskill, New Jersey, first as associate pastor for four years and then as pastor for nine years. From 1989 to 2002 he served at St. Agnes Parish in Phoenix, Arizona, first as parochial vicar for one year and then as pastor for the following 12 years. In 2002 he retired to the Carmelite House in Phoenix, Arizona, where he remained until he moved into assisting living in 2018. He died as a member of the St. Agnes Carmelite Priory.
May he rest in peace.

Donations in honor of the Reverend Tiernan O’Callaghan, O. Carm., may be made to: the Society of Mount Carmel, 1317 North Frontage Road, Darien, Illinois, 60561.

For further information on the Reverend Tiernan O’Callaghan, O. Carm., or the Order of Carmelites, please contact Carmelite Media at (630) 971-0724 or visit the Carmelite website at www.carmelites.net

Offer Hugs From Home Condolence for the family of O’CALLAGHAN, O’CARM., REVEREND TIERNAN