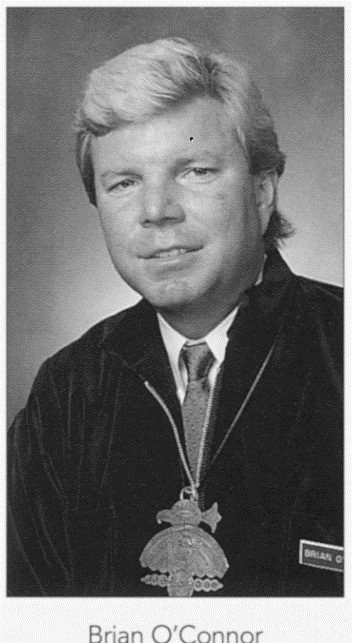 Brian John O’Connor of Phoenix, Arizona passed away in his sleep at home in the early morning of July 27, 2018. Brian was born on October 17, 1955 in Aurora, Illinois the first son of Dr. Charles A. O’Connor M.D. and Charlene M. O’Connor. He graduated from the West Aurora High School in 1973 and

subsequently earned a Bachelor Degree from Drake University in Des Moines, Iowa in 1977. Brian then moved to Glendale, Arizona and obtained a Masters Degree from the American Graduate School of International Management. Upon completion of his education, Brian began his career in business and specialized in public finance. Brian worked for Walter E. Heller and Company, Boetcher and Company and Hutchinson Shockey Erley and Company as an Investment Banker advising municipalities, public utilities and school districts

regarding their financial needs and facilitating the explosive growth of infrastructure and public improvements throughout Arizona and the Western United States. Brian was an outspoken optimist and proponent of the promise and future of Arizona and the West. While Arizona remained his home he

enjoyed spending time with his friends in McCall, Idaho, Newport Beach and Monterey, California. Brian was also involved in charitable endeavors through the Phoenix Thunderbirds organization which sponsors and promotes the Waste Management Phoenix Open Golf Tournament on the PGA tour, raising millions of dollars for Arizona charities each year. Brian worked in a variety of roles during the tournament over his 26 year association with the Thunderbirds. Brian was a creative and inspirational business man with investment interests in a variety of endeavors over his long career. However, his favorite business venture was the acquisition and ownership of the Class A Minor League Baseball team then known as the Salt Lake City Trappers. During Brian’s ownership of the team with several partners and friends, the Trappers recorded a 29 game winning streak which remains a professional baseball record. The Trappers and their record season are enshrined in the National Baseball Hall of Fame in Cooperstown, New York. Brian is preceded in death by his parents and is survived by his sister Cathleen Kovanic (Robert) of Sugar Grove, Illinois and his brothers Patrick O’Connor (Kathleen) of Santa Barbara, California and Michael

O’Connor (Mary) of Valparaiso, Indiana as well as his nieces Laura and Carolyn Kovanic, Elizabeth, Jane and Catherine O’Connor and Nephews Thomas Kovanic and Dr. Michael O’Connor M.D. A Catholic Mass will held at 10:30 A.M. Wednesday, August 22, 2018 at St. Thomas the Apostle Catholic Church at 2312 E. Campbell Ave., Phoenix. In lieu of flowers, donations to Thunderbirds Charities may be made in

Offer Hugs From Home Condolence for the family of O’CONNOR, BRIAN JOHN