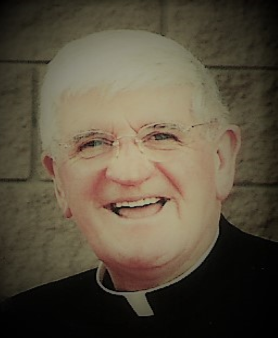 Monsignor Michael O’Grady, 85, died in his sleep on July 12, 2019 at his home in Ireland. Fr. O’Grady was born on May 21,1934, in Kildysart, County Clare in Ireland to Michael and Elizabeth O’Grady. He attended Kildysart National School and St. Flannan’s College, Ennis. He studied for the priesthood at St. Patrick’s College, Carlow and was ordained on June 7, 1958 for the Diocese of Tucson. He was incardinated into the Diocese of Phoenix when it was established in 1969. He became a prelate of honor, gaining the title “monsignor,” from St. John Paul II in 2001. During his 61 years as a priest, he served as a parochial vicar at St. Theresa Catholic Church in Phoenix, and at Holy Cross Catholic Church in Morenci. Fr. O’Grady also served as pastor of Christ the King Roman Catholic Church in Mesa, Holy Spirit Catholic Church in Tempe and St. Daniel the Prophet Roman Catholic Church in Scottsdale, in addition to serving as rector of SS. Simon and Jude Cathedral until he retired in 2005. Fr. O’Grady’s humble service to the Church and a pastoral style that was full of love, humor and immense kindness touched the lives of thousands of Catholics. All who knew Fr. O’Grady had a special place in their heart just for him. He often talked about how he always wanted to be a priest and it was evident by the way he reached out to the sick, poor, those in prison, and anyone carrying a burden. The people he met throughout his life were a great blessing to him, and he was full of gratitude for all the love and support he received throughout his years of service. Without a doubt, however, it was Fr. O’Grady who was the constant blessing to all those who knew and loved him. His “just show up” motto and other simple, but profound messages, were an inspiration to all of us. He remained active in his retirement years offering the sacraments, retreats, and parish missions as well as serving as chaplain for the Cursillo movement. In 2018 he was among three priests who accepted the “Guardian of Hope” Award on behalf of the Irish priests of the diocese, at the annual Night of Hope. He spent his summers at his home in Kildysart and the remaining time here at his home in Phoenix. Fr. O’Grady was preceded in death by his parents Michael and Elizabeth, brothers Dan, Paddy and Tom and sisters Annie Greene and Betty O’Dea. He is survived by his sister Rose Meaney, brother-in-law Michael, sister-in-law Eileen, and several nephews, nieces, and cousins. He will be dearly missed by his many friends in both Ireland and Arizona including his brother priests, past parishioners, and his dear friends, the Loreto Sisters. A Requiem Mass was held on July 19, 2019 at the Church of St. Michael in Kildysart, Co. Clare.
A Memorial Mass will be held on Friday, August 9, 2019 at 7:00 PM at SS. Simon & Jude Cathedral, 6351 N. 27th Ave., Phoenix. A reception will follow in the SS. Simon & Jude School gymnasium. Donations in Fr. O’Grady’s memory may be made to SS. Simon & Jude School for the benefit of the Msgr. Michael O’Grady Memorial Endowed Scholarship Fund, 6351 N. 27th Ave., Phoenix, AZ 85017.

May the road rise to meet you. May the wind be always at your back. May the sunshine warm upon your face and, until we meet again, may God hold you in the palm of his hand.

Offer Hugs From Home Condolence for the family of O’GRADY, MONSIGNOR MICHAEL