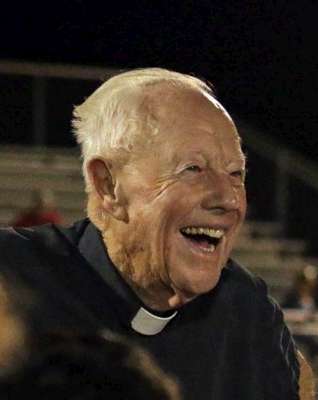 Harry Tyler “Dutch” Olivier, Society of Jesus, died March 17, 2015 in Phoenix, Arizona. He was 88 years of age and had been a Jesuit for 70 years. Dutch was born in San Francisco on September 5, 1926, the son of Albert Olivier and Mary Strehl. He entered The Society of Jesus in August 14, 1944. And after 13 years of Jesuit formation, he was ordained a priest in San Francisco on June 15, 1957. From 1987 until his death, Dutch was stationed at Brophy College Preparatory, Phoenix, where he was known for remarkable wisdom, kindness, and an easy smile, traits that nicely balanced an innate sense of his own spiritual true north. For 28 years, Dutch generously served the Brophy community. From teaching a 12th grade religion class that each year was a consistent magnet for seniors, to cheering on and acting as chaplain for many varsity sports and activities with the passion, knowledge, and fidelity of a faithful fan, Dutch covered the campus. For Brophy staff and student alike, Dutch embraced his role as teacher-pastor through a real and authentic love for his fellow human beings. And into every action–spiritual or secular–Dutch infused his own brand of holiness. And that holiness became a kind of template from which those around him would model their own actions. He is survived by a brother, Albert, and his wife, of Novato, California, as well as many cousins. Visitation will be held on Sunday, March 22, 2015 from 3:00-5:00 PM at Brophy Chapel, 4701 N. Central Avenue, Phoenix. *Public viewing will be Monday, March 23, 2015 from 6:00AM – 2:00 PM at Brophy Chapel. Funeral Mass of Resurrection will be at 4:00 PM, Monday, March 23, 2015 at St. Francis Xavier Catholic Church, 4715 N. Central Avenue, Phoenix. Burial will be at the Jesuit plot at Santa Clara Mission Cemetery, Santa Clara, California. Arrangements entrusted to Whitney & Murphy Funeral Home.