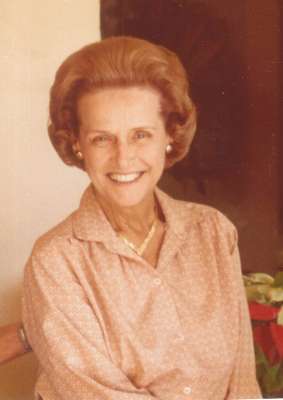 96, passed away peacefully, surrounded by her loving family. Born in 1920, she would often say that she never believed that she would live so long. She was cherished as our matriarch, the last surviving family member of her generation. For the last eleven years, she lived at the Terraces of Phoenix retirement community, where she enjoyed the close companionship of many wonderful friends; some whom she had known most of her adult life. One of her favorite ways of introducing herself to a new person was by saying, “I’m an Okie from Muskogee.”   Born to Frank and Edith Dickmann, and raised in Oklahoma, Jerre was the second oldest of six siblings. During World War II, she came often to visit her sister, Frances Naughton. She moved permanently to Phoenix in 1946 and, in that year, married John O’Malley, Jr., a member of a family that owned several lumber yards in Arizona and the Southwest. Raising two children, she was also active in school and community groups, which included the Board of Visitors, Junior League of Phoenix, St. Joseph’s Hospital Auxiliary and the mothers clubs of St. Francis, Brophy and Xavier. Jerre had a great love for family and friends. She enjoyed every moment spent with them. Her fond leisure enjoyment was her weekly card game with her bridge group. She also loved to watch college football games on TV, especially her favorite three teams: Oklahoma, Oklahoma State and Notre Dame. Survivors include son, Mark (Carolyn) of Phoenix; daughter, Sue Hart (Steve) of Encinitas, California; grandsons, Brian and Gregory Hart; and step-grandson, Charles Daniel. Her husband John and grandson Kevin Hart preceded her in death. Memorial Mass will be celebrated at 10:00 A.M., Saturday, April 29, 2017 at Brophy Chapel, 4701 N. Central Avenue, Phoenix. The family suggests contributions, in lieu of flowers, be made in her name to the John and Jerre O’Malley Endowment Fund, Brophy College Preparatory, 4701 N. Central Avenue, Phoenix, AZ 85012 or to the Salvation Army, 2707 E. Van Buren, Phoenix, AZ 85008. Arrangements entrusted to Whitney & Murphy Funeral Home.

Offer Hugs From Home Condolence for the family of O’MALLEY, GERALDINE “JERRE” D.