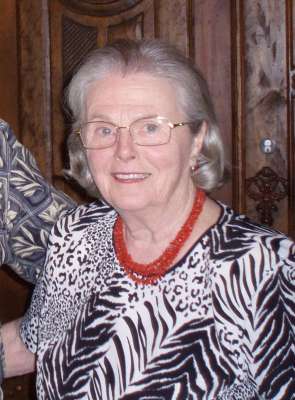 88, of Phoenix, Arizona passed away June 23, 2017 surrounded by her loving family. She was born July 15, 1928 in South Bend, Indiana to Herbert and Margaret Jones. There she met Ted O’Malley Jr. while he was attending Nortre Dame University. They married shortly after his graduation on June 5, 1951 and moved to Ted’s home town of Phoenix, Arizona where she has lived ever since. She worked as a full time mother and housewife raising their six children. She enjoyed life and was a devoted wife, mother and grandmother. She was a member of the Phoenix Junior League, the Benedictine Oblates, Valley Field Riding and Polo Club and the Equestrian Order of the Holy Sepulchre of Jerusalem. She loved her time volunteering for different organizations and raised her children with a love of family and others. Jane Anne is survived by her husband of 66 years Edward V. O’Malley Jr., Mary Beach (Rowan), Anne Edelstein (Robert “Tico”), Maureen O’Malley, Larry O’Malley (Nancy), Peggy Anton (William), Brigid O’Malley, 13 grandchildren and 2 great grandchildren. She is preceded in death by her sister Margaret Jones Logan and her daughter Katherine O’Malley. A private interment will be held at St. Francis Cemetery. A memorial service will be held in early fall. In lieu of flowers donations can be made to Andre House, 213 S. 11th Avenue, Phoenix, AZ 85007. Funeral arrangements entrusted to Whitney & Murphy Funeral Home.

Offer Hugs From Home Condolence for the family of O’MALLEY, JANE ANNE JONES