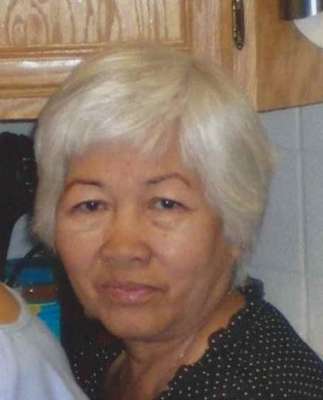 Ely M. Omega, 74, passed away on Saturday, April 23, 2016, in Phoenix, Arizona where she owned a home and resided since 1985. Born in the Philippines on November 27, 1941, Ely graduated Valedictorian of her college class and went on to lead a very exemplary life as a mother, American citizen, friend and neighbor. Her guiding force in life was her unwavering adherence to her religious faith (Catholic). It was her devout sense of faith that helped her survive breast cancer. Ely, a working mom, loved cooking, gardening, shopping, eating Filipino foods and later in life she became a political activist supporting causes that would better the lives of others. She is survived by 5 loving and successful children: 2 sons-Rolando and Ronald, 3 daughters- Lanilyn, Arleen, Myra Linda and 15 grandchildren. In addition to family, she leaves behind many friends including longtime companion and caregiver Don Smith, a local boxing writer. Visitation will be Friday, April 29, 2016 from 4:00 – 9:00 PM with a Rosary on Saturday, April 30, 2016 at 10:00 AM at Whitney & Murphy Funeral Home, 4800 E. Indian School Road, Phoenix. Interment will follow at St. Francis Cemetery, 2033 N. 48th Street, Phoenix. Her Family would like to thank everyone who played a positive role in her blessed life.

Offer Hugs From Home Condolence for the family of OMEGA, ELY M.