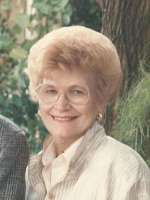 Our loving mother and grandmother passed away on January 9, 2012 at the age of 91. Merwyn was born to F. Wesley and Kathleen Davies in Royal Oaks, Michigan. The family relocated to Los Angeles in the 1930’s. Merwyn was the third oldest child in a family of seven children; six sisters and one brother. All of her siblings and her husband predeceased her. Merwyn married Maurice O’Neill in Arcadia, California at the home of her parents. They met while at college in Los Angeles and were married for 61 years. After the war, in 1948, Maury and Merwyn moved to Phoenix. Through the years, there were many multifamily holidays and a semi-annual visit back to the beach and Arcadia, California. Life was filled with traveling, dinners and golf games together. Merwyn enjoyed entertaining at home with family and friends. Her penchant for cooking was enviable, making gourmet recipes, learned in cooking school, into wonderful family dinners. One of the Phoenix Suns most avid supporters and fan, Merwyn could discuss the plays and the players with the best of them. Always, the consummate game player, many an evening ended with a very competitive bridge game or a gin rummy, dominoes or “Scrabble” match with Maury and friends. Merwyn had a great capacity for listening, a kind and generous mother and friend. A mother’s gifts transcend generations. Our mother will be missed by everyone in our family; Maureen Hall (Tom), Kay Muzzy, and grandchildren Sherry Sexton (Doug), Kevin Hall, Scott Muzzy (Penny) and Michael Muzzy. Great grandchildren include Chandra Hall, Kyleigh Hall, Morgan Hall, Nicholas Muzzy and Grayson Muzzy. In remembrance, a contribution to the charity of your choice in her honor would be appreciated.

Offer Hugs From Home Condolence for the family of O’NEILL, MERWYN L