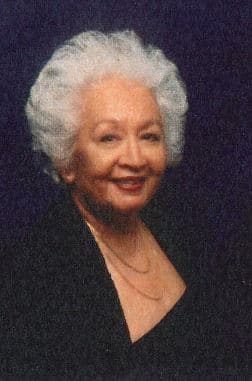 Hortensia Gomez Ortiz, born on July 27, 1925, to Rafael Ruiz Gomez and Dolores Rodriguez, and passed away February 23, 2022, at 96 years of age. She was born in Tucson, Arizona and completed her education in Phoenix. After graduating from high school, she enrolled in secretarial school at Phoenix College where she graduated with honors in 1947.

She married Leo G. Ortiz who worked for a trucking company and started a family. After secretarial school, she worked for the Phoenix Police Department as a dispatcher and from there she went on to work at the Legislature in both houses. She became a secretary for Senator Osborne for over 20 years and retired from that position in 1995.

During her retirement years, she and her husband traveled the world. He passed away in 1998. In 2013 she married Danny Valdivia who died in 2015. She became very active in the Hispanic history of Phoenix, St. Vincent de Paul charitable programs and belonged to LULAC and Chicanos Por La Cousa. She was featured in a PBS special showcasing Hispanic heritage in Phoenix geared towards Post 41 which was a social outlet for the Phoenix community.

She was the eldest of 11 brothers and sisters, 2 of which are still alive: Raul R. Gomez and Elda G. Islas.
She is also survived by her only son, Leo Paul Ortiz and one daughter, Lupita M. Terrazas (Diana) and 11 grandchildren.

A visitation will be held from 5:00 – 7:00 PM on Tuesday, March 15, 2022 at Whitney & Murphy Funeral Home, 4800 E. Indian School Road, Phoenix. A Funeral Mass will be held on Wednesday, March 16, 2022 at 10:00 AM at Corpus Christi Catholic Church, 3550 E Knox Road, Phoenix. Burial to follow St. Francis Catholic Cemetery. In lieu of flowers donations are suggested to be made to Hospice of the Valley, 1510 E. Flower Street – Bldg. 2, Phoenix, Arizona 85014.
Condolences may be expressed at www.whitneymurphyfuneralhome.com

Offer Hugs From Home Condolence for the family of ORTIZ, HORTENSIA GOMEZ