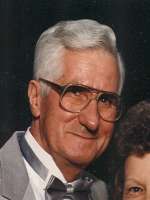 Frank T. Oswald, 95, passed away peacefully on January 19th, 2011. Born in California, Pennsylvania, Frank graduated from high school and immediately started to work in the coal mines to help support his family. World War II called and he left to serve in the Army as a medic in the Pacific Arena. A decorated soldier, he was most proud of his bronze stars among other honors. After the war, he married his wife of 52 years, Stella, who passed away in January 2000. They had three children: Jane (husband Leslie Tanimoto), who also predeceased him in 1994, Frank (wife Diane Stanek Oswald), and Mary (husband Don Tabuena). Upon retirement, he and Stella traveled extensively and retired to Arizona, with a brief hiatus in Hawaii. He was quite the character and could talk nonstop at times on any given subject with his favorites being politics and religion. He loved sports, especially baseball, and cheered for any team who was playing against the NY Yankees. He is remembered as a ‘good man’ by all who knew him. Frank was a devout Catholic and had a strong faith in God. In addition to his children, he is survived by his grandson Tim (wife Jillian), granddaughters Hayley, Julie, Jackie, Masayo, Laura, and Rebekah and great-granddaughters Delaney, Ryleigh and Olivia in addition to his sisters-in-law and many nieces and nephews. A Funeral Mass will be celebrated on Monday, February 14th at 10:30 a.m. at St. Anne Catholic Church, 440 E. Elliott Road, Gilbert, AZ. Interment will follow at 12:30 p.m. at the National Memorial Cemetery of Arizona, 23029 N. Cave Creek Road, Phoenix. The family would like to extend a special thank you to the ‘angels’ of St. Anne’s Ministry of Care Home Visits who tirelessly gave of themselves during the last several years of Frank’s life.

Offer Hugs From Home Condolence for the family of OSWALD, FRANK T