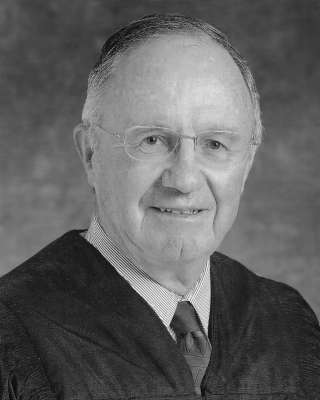 Hon. Thomas William O’Toole of Phoenix, Arizona passed away October 13, 2016 at age 78. Born April 12, 1938 in Marshalltown, Iowa, Judge Thomas W. O’Toole (Tom) was the first of four sons born to Dr. Roger L. O’Toole and Emily Fisher O’Toole Cartwright.  A long-time resident of Phoenix, Tom moved to the valley in 1956 prior to attending the University of Notre Dame (Economics, 1960). Following his degree from the University of Arizona Law School (1966), Tom served Arizona as Assistant Federal Public Defender (1971-1976) and Federal Public Defender for the District of Arizona (1976-1984), notably arguing a case before the United States Supreme Court in 1977. As a testament to his stewardship and integrity, Tom was appointed Judge, Maricopa Superior Court by Governor Bruce Babbitt in 1984, where he continued to serve Arizona for 24 years until retirement in 2008. His peers remember him as a fair and compassionate jurist of balanced moral character, administering justice fairly and efficiently. Outside the courtroom, Tom was proud to officiate numerous weddings and boasted of his high “success rate”. He was a one of a kind family man who brought a quiet sense of joy and peace to all who knew him. This past summer, he and his wife, Elaine, celebrated 50 years of marriage, surrounded by their children and grandchildren on an Alaskan cruise. Family & friends remember him as a loving husband, caring father, devoted Catholic, superb athlete, and Good Samaritan, who championed humanitarian causes such as: Boys Hope Girls Hope of AZ, Forest Highlands Foundation (Flagstaff), Notre Dame Law School Advisory Council, and Martha-Ellen Tye Foundation (Marshalltown, IA). As a sportsman, Tom was a naturally gifted and fiery competitor. Though he never ‘shot his age’, nor did he ever have a hole-in-one, Tom was a life-long lover of golf. Key to his magnetism was Tom’s dry sense of humor. He surely would be noting that the Notre Dame Football team is on a bye week for his funeral. Captain of his own ship, many sought his counsel in times of distress, his character always a ‘sturdy rudder’ for those in need. Preceded in death by his parents, as well as his brother John T. O’Toole, Tom is survived by his wife, Elaine Senini O’Toole, his two brothers, Dennis O’Toole (Trudy) and Michael O’Toole (Noreen), his 4 sons, Nicholas (Megan), John (Sofía), Ryan (Minjeong) and Matthew (Anna), and 4 grandchildren, Lulu, Carleton, Velouria and Simón Tomás. Visitation will be held from 6:00pm-8:00pm with a Rosary at 7:00pm, Friday, October 21, 2016 at Whitney & Murphy Funeral Home, 4800 E. Indian School Road, Phoenix, AZ 85018. A Memorial Mass will be celebrated at 12:30pm, with a reception following on Saturday, October 22, 2016 at St. Francis Xavier Catholic Church, 4715 N. Central Avenue, Phoenix, AZ 85012. Donations can be made to: Notre Dame Law School, Judge Thomas O’Toole Memorial, 1341 Biolchini Hall, Notre Dame, IN 46556 or Boys Hope Girls Hope of Arizona, 3443 N. Central Avenue, #7, Phoenix, AZ 85012.

Offer Hugs From Home Condolence for the family of O’TOOLE, HON. THOMAS WILLIAM