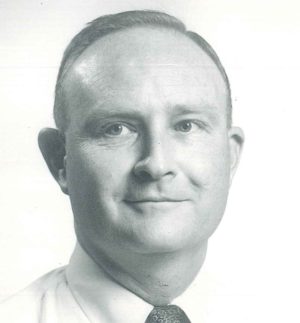 John Paul Ovens, a retired orthodontist, died on December 31, 2016, in Phoenix, Arizona, at the age of 89.  John was born in Bisbee, Arizona on July 26, 1927, the fourth child of James Mason Ovens and Marguerite A. Ovens.  Being raised in Phoenix, he attended St Mary’s Grammar School and St Mary’s Boys’ High School.  John received a Bachelor’s of Science degree from Loyola University of Los Angeles in August, 1948, his education there being interrupted by 16 months as a Navy Corpsman.  After graduation from Loyola University, John entered the University of Notre Dame and received a M.S. degree in January, 1950.  John worked as a chemist as the Studebaker Corporation in South Bend, Indiana while waiting to start his dental studies in September, 1950 at the University of Pennsylvania. Upon graduating with a dental degree in June 1954, he returned to Phoenix and practiced general dentistry for one year.  John then went to the University of Washington in Seattle for a two-year program to specialize in orthodontics.  After receiving a M.S.D. degree, he returned to Phoenix and practiced orthodontics from 1957 until retiring in 1988. He was a member of the local and state Dental Societies and the American Association of Orthodontists.  John was a Diplomat of the American Board of Orthodontics and past President of the Arizona State Orthodontic Society.  He was also a member of Sky Harbor Kiwanis Club, twice serving as President and was a member of the Knights of Columbus #1189. Dr. Ovens was an avid traveler and accomplished photographer.  After retiring, he went to Romania twice with Global Volunteers for three weeks each time to teach conversational English to sixth grade students. For over seven years, he volunteered at the Andre House on Thursday afternoons to prepare and serve food to the homeless. John is survived by his daughter, Julie Ovens-Jewell, granddaughter Jessica Jewell; his son, Christopher Ovens (Jeanette Jurado); and two grandsons, Luke and John Paul of Las Vegas; as well as twenty nieces and nephews. He is preceded in death by his brother James Ovens M.D., sisters Margaret Prince and Mary Ellen Yakeley. A Vigil will be held from 6:00 P.M. to 8:00 P.M., on Friday, January 20, 2017 with a Rosary at 7:00 P.M. at Whitney & Murphy Funeral Home, 4800 E. Indian School Rd., Phoenix. A Funeral Service will be held at 10:00 A.M., Saturday, January 21, 2017, also at Whitney & Murphy Funeral Home. Burial to follow at St. Francis Catholic Cemetery, in Phoenix. In lieu of flowers, please make a donation to the charity of your choice.

Offer Hugs From Home Condolence for the family of OVENS, JOHN PAUL