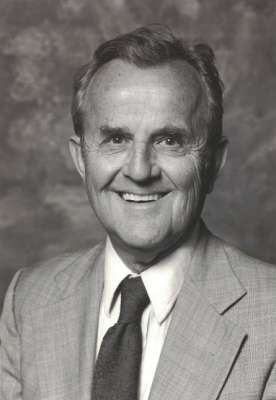 James Louis Palmer, son of Dr. & Mrs. E. Payne Palmer, Sr, was born on October 12, 1918, at 1029 North Central Avenue on the kitchen table. He was the 6th child in a family of 7. He attended St. Mary’s grammar school and Brophy College Prep for only 3 years when it closed due to the great depression. He then graduated from Bellerman Prep in San Jose, California. He attended Notre Dame University his freshman year, and then the University of Arizona for 3 years when he graduated with a Bachelors degree in Music. Then he left for California where he hoped to be successful as a musician, writing popular songs. His first job in California was as a tool planner with Lockheed Aircraft Corporation. During that period of time there, he met the true love of his life, Barbara Jane Herlihy. They were married on January 3, 1942, shortly after WWII war with Japan was declared. Their first 2 children were born before he joined the Navy in which he served for almost 2 years, seeing service in the South Pacific and waters off of Japan and China. When his Navy career ended, James returned home to Barbara and his 2 children. He remained in the Los Angeles area for 6 years. His success in the music field was a song used in a cartoon. His livelihood was obtained by working for his brother-in-law in the printing business. He returned to Phoenix in May of 1951 with his then family of Barbara and 4 children. With his brother-in-law he entered into the printing business in which he remained for 22 years, leaving his original company to start a new with his son and then with his daughter. He remained with the James Palmer & Daughter Printing Company until he retired. He and Barbara traveled extensively around the world, which was a passion for both of them. He leaves behind, Barbara and their 7 children, Mary Louise Wagner, James Louis Palmer, Jr., Sally Marie Lewis (Roger Lewis), Peggy DeWald (Terry DeWald), Betsy Palmer-Hodge, Diane Palmer and Tina Heffernan (Art Heffernan), 19 grandchildren and 19 great grandchildren. His Catholic faith played a great part in his life. He served his community as a long time member of Kiwanis. He was devoted to the St. Vincent de Paul Society. At the age of 60, he gave a piano concert at the Scottsdale Center for the Arts, $10,000 was raised for the St. Vincent de Paul dining room. This was the high life of his musical career. His love for his God, Wife and children gave him a happy life. He was almost glad he had not succeeded in a musical career, otherwise he might not have had the wonderful life he lived. A Funeral Mass will be held on Friday, May 29, 2015 at 11:00 A.M. at Brophy Chapel, 4701 N. Central Ave., Phoenix, AZ. Arrangements entrusted to Whitney & Murphy Funeral Home, 4800 E. Indian School Rd., Phoenix, AZ.

Offer Hugs From Home Condolence for the family of PALMER, JAMES LOUIS