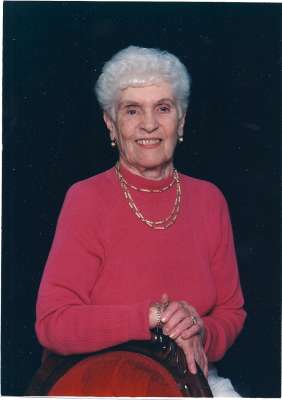 Estelle C. Palumbo, 91, a long time resident of the Jersey Shore, and most recently of Phoenix, Arizona, left  this world on Wednesday, February 9, 2014.  Estelle was born September 9, 1922 to the late Dominic and Mary Palumbo.  She was preceded in death by her husband, Anthony J. (“Oak”) Palumbo.  Legend has it that Estelle said “I was so proud of my last name, I married a Palumbo so I could keep it.”  Estelle was one of nine children, including her twin sister Eleanor, who grew up in Belmar, NJ.  Before retiring to Deerfield Beach, Florida, Estelle was the long time school secretary at St. Rose High School in Belmar.  She was a communicant at St. Rose and St. Catherine’s Churches. In 2007 Estelle moved to Phoenix to be closer to her sons and their families.  Estelle is survived by her twin sons, Michael R. (Jean) and Anthony J., Jr. (Anna Marie), four grandchildren, Scott (Emily) of Phoenix, AZ, Craig of Austin, TX, Katherine of Chicago, IL and Anthony H. of Phoenix, AZ and two great-grandchildren, Ian and Lily Palumbo.  Reflective of her devotion to all segments of her family, Estelle had an encyclopedic memory of the birthdays and anniversaries of the dozens of aunts, uncles, and cousins, who comprised the family, and she never failed to send cards to mark those occasions.  As one of her nephews said upon learning of her passing: “She was a wonderful, classy lady.  She had style.”  Funeral services were held in Belmar, NJ on February 27.  Memorial contributions may be made in Estelle’s memory to the St. Rose High School Reconstruction Fund (Hurricane Sandy), 607 Seventh Avenue, Belmar, NJ  07719.  Arrangements were entrusted to Whitney & Murphy Funeral Home.

Offer Hugs From Home Condolence for the family of PALUMBO, ESTELLE C.