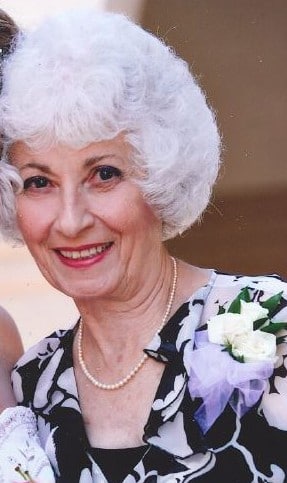 Mary Helen (Manias) Parker was born October 11, 1929 in Peoria, Illinois. After graduating from high school, she attended the University of New Mexico in Albuquerque where she met her future husband, Charles Wolcott Parker II, who was always called “Wally.” They were married in Peoria on December 27th in 1948 and their daughter, Cynthia Jean, was born the following November. The couple lived in Peoria until 1960 when they moved to Beloit, Wisconsin.

As a young woman, Mary Helen was a photographer’s and fashion model who won national beauty contest and was crowned “Sky Queen” in Dallas, Texas in 1948. In later life she became an accomplished paralegal as well as being a wife and mother who volunteered at the hospital and her daughter’s school and enjoyed acting in the community theater.

Having an adventurous spirit, the Parkers took up residence in Monterrey, Mexico in 1966 where Wally became a marketing executive for the Mexican conglomerate Fabricación de Máquinas. Moving back to the States in 1971 they lived in Los Angeles California for five years and then moved to Phoenix, Arizona to be near Cynthia and her two granddaughters, Kristin and Erin. In 2007, Erin married Gabriel Abril and they have two sons, Landon and Levi.

Mary Helen was always devoted first and foremost to her family. She left us in body on November 3, 2020 but not in spirit. We miss her very much but will never forget her love and kindness.

Offer Hugs From Home Condolence for the family of PARKER, MARY HELEN