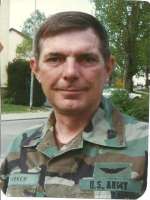 Thomas Bernard Parker was born February 21, 1945 in Denver, Colorado and raised in upstate New York and Shelton, Connecticut.  He attended high school in Arizona at Scottsdale High and graduated from Arizona State University where he was a member of the ROTC.  The ROTC was the beginning of a military career that spanned forty years and included serving in Vietnam, flying helicopters to rescue wounded troops from the field.  Those heroic efforts earned him numerous medals and honors which include the Distinguished Flying Cross.  After his discharge from the Army in 1970, he maintained his connection to the military through duty in the Army Reserves and the Army National Guard, and continued to earn honors and promotions for his devotion to service to his country.

Tom passed away September 29, 2013 and is survived by his wife, Anita Parker, daughter Allison and daughter Trilde Moore, grandchildren Maddie, Simon and Jessie of Phoenix, daughter Heidi Fleming and grandchildren Benjamin and Brandon of Newberg, Oregon, mother Ceil Parker and sisters Leslie and Kerry, and Aunt Rita Lambert  of Connecticut,  and sister Martha Parker of Minnesota.

Offer Hugs From Home Condolence for the family of PARKER, THOMAS BERNARD