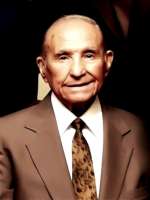 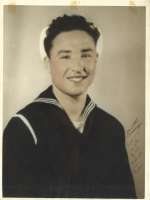 Ruben was born on March 30, 1923 in Tucson, AZ. The oldest of six, they moved to Phoenix as a young boy. He found himself working jobs in Phoenix, making money to help support the family as they moved from place to place eventually settling in Central Phoenix. As a young man he enlisted in the Navy and served his country during WWII. After the war, he returned home and married our mother, Evangelina Sesma. They began their family and our Dad began his life as an entrepreneur, military man—serving in three branches (Navy, Army and Air Force) and father. His businesses included a soda shop, two restaurants, and owner of the Estrella Tortilla Factory in South Phoenix for 30 years. At the same time, he worked for the City of Phoenix- Engineering Department. He loved traveling and playing golf. His friends are many and his love for life was endless. He touched everyone he met and always made people smile or laugh in his silly way. His love for sports included his Diamond Backs and AZ Cardinals, and always high-fived everyone around him at a score. For our father this is not the end, it is the beginning of renewed love in our hearts. He leaves behind three children, Ruben Jr. (children Frankie and Alexis), Norma (children Jason, great-grandchildren Alec and Alivia; Jacob, wife Andrea; and Ralph) and Richard with wife Carol (children Angelica and Andreas.) Thank you to all of you, his close buddies who have been a part of his journey.
Services will be on Tuesday, September 11, 2012 at St. Mary’s Basilica (231 N. 3rd Street, Phoenix). Visitation: 9:00 AM – 9:30 AM; Mass, 10:00 AM; and burial to follow at National Memorial Cemetery of Arizona (23029 N. Cave Creek Road, Phoenix). Vaya con Dios.

Offer Hugs From Home Condolence for the family of PARRA, RUBEN M.