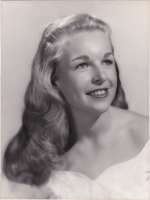 Barbara Ross Parsons joined her beloved husband Grant and with family and friends by her side, passed away peacefully on August 19, 2013.

To Grant, she was always “Barbara Jean.” Everyone else called her “Sis.” Surrounded in age by her brothers Jack and Tom, it was always more than a nickname. From the day she was born in August of 1928, she became a sister forever to so many others she came to know and treasure throughout her 85 marvelous years.

The only daughter of Dr. and Mrs. Norman Ross, she was born in San Diego and came to Phoenix as an infant, in an open car, over the old plank road in nearly three days time. She made lifelong friends at Kenilworth Elementary and North High schools. As a member of X Club, she joined other girls raising money, materials and support for the war effort. World War II ended on her 17th birthday!

The following year took her to Scripps College in Pomona, California and later to the University of Southern California where she was a sister of Kappa Alpha Theta sorority and graduated with honors in 1950. She earned her teaching certificate and wrangled a classroom full of kindergarten and first-grade students at Franklin School in Santa Monica until she started her own family.

She adopted a collie from actress Shirley Temple and began a lifelong love affair with the canine world, adopting dozens of dogs throughout her life. She has now been reunited with her final furry friend of the last twenty years, an overweight Corgi named “Buddy.”

Returning to Phoenix in 1955, she jumped back into community service with both feet. The Junior League of Phoenix, St. Luke’s Board of Visitors, United Way, Multiple Sclerosis Society, Visiting Nurse Service and the Volunteer Bureau all knew her well. In 1967, she created the MS Society “Swap,” a charity auction of services format that has inspired countless similar fundraisers to this day. The “Boutique” department she established and managed at the annual Junior League Rummage Sale was always a big success. She became so popular in the non-profit arena that she was once asked to join the board of the University of Arizona Alumni Association, but she had to decline because to their surprise and disappointment, she was not an Arizona alumnus.

When her mother suffered a massive stroke in the 1960s, Sis became her constant companion. Whether she was running local errands or pushing her wheelchair around the Egyptian pyramids, she nursed her mother back to enjoy a long full life.

She joined Grant when he retired in 1993. They traveled around the world together, often with her mother, family and friends. They spent several months every year at their cabin in the White Mountains where they enjoyed fifty summers together. Sis grew amazing flowers, made the best apple pie in the world, and never met a kid or a dog she didn’t like.

Grant and her brother Jack Ross died one day apart last January. She is survived by her son Ross Parsons and his fiancée Linn Lewis, her daughter Stephanie Jury, her granddaughter Chelsea and husband Chris Skallerup, her great-grandchildren Keegan and Zoe Skallerup, her brother Dr. Tom Ross and wife Jan, her sister-in-law Carolyn Humphrey, fourteen nephews and nieces and their families.

Services are pending. In lieu of flowers, please consider a donation in her honor to the Arizona Humane Society.

Offer Hugs From Home Condolence for the family of PARSONS, BARBARA ROSS