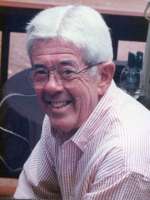 Passed away peacefully in his sleep on Monday, January 14th at the age of 84.  A native of Phoenix, Grant was born at Good Samaritan Hospital one day before his beloved wife “Sis” in August of 1928. He attended Emerson Elementary School and graduated from North Phoenix High School in 1946.  Enlisting in the Navy after graduation, he served on Johnston Island in the Central Pacific and was honorably discharged in 1948. Upon his return to Arizona, he attended Phoenix College and the University of Arizona where he was a proud member of Sigma Chi fraternity and graduated in 1952.  In 1956, he married his former high school classmate, Barbara Jean Ross and adopted her two young children, Ross and Stephanie.  He became an insurance agent and after five years of night school, earned his C.P.C.U. designation and went to work for Valley National Company Insurance where he became Vice President, retiring in 1992.  Grant loved his family, his friends and University of Arizona sports.  Through good times and bad, his loyalty to all never faded.  In later years, he enjoyed walking to the Phoenix Country Club, where he was a member for nearly half a century, and having a glass of iced tea with old friends every afternoon.  He reserved every Friday for a pastrami sandwich and lunch with friends at a local deli.  He was always ready with a smile and a joke, always remembered your name, and very seldom could he walk into a restaurant where he didn’t recognize at least one person there.  He loved golf, tennis and dogs.  He spent almost fifty summers in the White Mountains, fishing, reading, gardening and occasionally trapping a trespassing skunk which he would load into his pickup and release back into the forest.  He loved simple things; a glass of wine at sunset, a haircut every two weeks and watching Diamondbacks baseball on TV.  Grant is survived by his wife Barbara Jean (Ross) Parsons, his children Ross Alden Parsons and Stephanie Colleen (Parsons) Jury, his “favorite Arizona Wildcat” granddaughter Chelsea Rae (Parsons) Skallerup, her husband Chris and two great-grandchildren Keegan and Zoe, Ross’s fiancée Linn Lewis, his sister Carolyn Humphrey, his brother-in-law Tom Ross and his wife Jan, and a dozen nephews and nieces: Marty, Bud and Tim Humphrey, Lance, Tom, Jack and Rex Ross, Robert Foy, and Carolyn, CC, Alison and Ty Ross-Goldwater.  Services will be held at Christ Church of the Ascension, 4015 E. Lincoln Drive in Paradise Valley on Monday, January 28, 2013 at 1pm.  In lieu of flowers, please make a donation in Grant’s name to your local Humane Society.

Offer Hugs From Home Condolence for the family of PARSONS, GRANT ALDEN