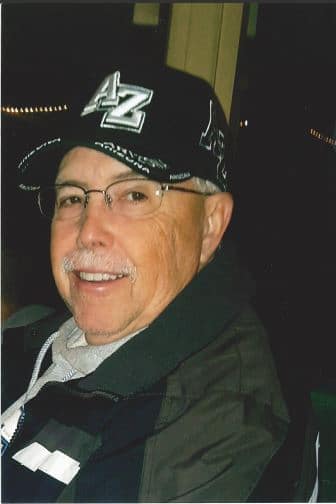 Ronald Eugene Passmore, of Phoenix, Arizona passed away peacefully on Friday November 27, 2020. Ron was born in Dinuba California to Herschel and Ruby Passmore. At the age of five his family packed up and moved to Coolidge Arizona. Growing up there, Ron played the drums in “For what it’s worth” a band he started with his friends.

As an adult Ron worked for Mountain Bell where he met his beautiful wife Carmen, they were married on September 28, 1982. Throughout his life baseball was his passion, from his playing days to his most cherished time coaching his grandson Antonio. He spent many years announcing the games always traveling with Veronica and Antonio to different parks to see his games. Ron’s big heart led him to volunteering for many organizations including Ahwatukee Little League, USSSA Baseball, Desert Vista High School Baseball, and the Champions League where he was the official announcer both in and out of Arizona.

Ron is survived by his wife Carmen, daughter Veronica, three sons; Chris, Nick, and Keith, as well as his grandkids; Anotnio who was his pride in baseball, Joseph “cutie boy”, Vincynt ‘da Vincynt man”, Avyana “pretty”, Dominyk ‘grandpas little boy”, Nicolas, Angelina, Savannah, Ava, Katrina, Kyle, Clay, and Kate who were his passion in life, who he would do anything for. Grandpa loved his grandkids beyond words. Ron will always be remembered as a loving, caring man, who would give the shirt off his back to anyone in need. As well as his brother David ‘Skip”.

A visitation will be held at Whitney & Murphy Funeral Home, 4800 E Indian School Road, Phoenix on Thursday, December 3, 2020 from 4-7 P.M. with a rosary at 6 P.M. The funeral Mass will be held at Immaculate Heart of Mary Catholic Church at 11 A.M., 909 East Washington St, Phoenix AZ 85034. There will be a graveside service to follow at St. Francis Cemetery 2033 N. 48th Street Phoenix, AZ 85018. Condolences may be expressed at www.whitneymurphyfuneralhome.com

Offer Hugs From Home Condolence for the family of PASSMORE, RONALD EUGENE