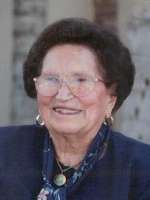 A long-time resident of Phoenix, died Tuesday the 4th of April at home surrounded by her
family.Born in 1915 in San Giuseppe, Italy, and raised in Villa Latina, Italy, she met her one true love, Frank George Patchett, in 1933. They were married in Italy in 1937 and moved to Detroit, Michigan, before finally settling in Phoenix, Arizona. Maria loved her family, cooking delicious food, and her beautiful garden, which was the showcase of the neighborhood. She had a wonderful sense of humor, had a heart full of love, and was loved by everyone who met her. Maria was a devout Catholic and was an active participant in St. Theresa Church for over 55 years. She will be deeply missed by her family and friends. Maria is preceded in death by her husband, Frank Patchett, daughter-in-law, Connie Patchett, and her granddaughter, Regina Patchett. She is survived by her children, John Patchett, George Patchett and his spouse Debbie Patchett, Ann Wagner and her spouse Henry Wagner, and Maryjean McBride and her spouse Louis “Bud” McBride; her ten grandchildren; and many great-grandchildren. The Funeral Mass will be held on at 10am, Wednesday, April 11th, at Saint Theresa Catholic Church located at 5045 E. Thomas Road. Interment will follow at St Francis Catholic Cemetery.

Offer Hugs From Home Condolence for the family of PATCHETT, MARIA GIUSEPPA