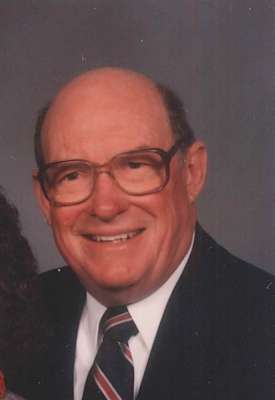 Petersen, Myron Leroy, 91, of Phoenix, Arizona, entered the Kingdom Triumphant on September 2, 2016. Myron was born on Mother’s Day, May 10, 1925; the first of four beloved sons of Laura Dumas and Charles Petersen, Sr. One brother, Arnold Petersen, survives him. His wife Barbara, daughters Darlene Garrison and Lori Kalat, and son Michael survive him. Stepsons Steve, Dave, and Jack Buffett, Scott Sanders, Anthony and Robert Smith, stepdaughter Tara Hook, 24 grandchildren and 7 great grandchildren also survive him. Myron leaves behind seven first cousins and many second cousins, nieces, nephews and a host of friends. He maintained very close ties with friends and family members throughout his life. Myron graduated from Benson High School in Omaha, Nebraska in 1943. He attended Iowa State as a Navy V-12 officer and attained the rank of Lieutenant. He earned a degree in electrical engineering from the University of Arizona in 1947. While serving in the Navy he was assigned to the Naval Messenger Service. Myron was 200 miles off the Bikini Island Atoll on an LST during an atomic bomb detonation in 1946. He was a proud employee of General Electric for 40 years, retiring in 1987. He was instrumental in the design and manufacturing of GE aircraft engines and worked on the Corona Project. Myron’s generous spirit and life of service to his church, country, state, Rancho Vista Neighborhood Association and beloved family has influenced many lives and left a legacy for all who knew and loved him. He always wore a smile and had a kind word for everyone. A celebration of Myron’s life will be held at Central Presbyterian Church, 37 E. Indian School Road, Phoenix, AZ on October 8, 2016 at 4:30 pm. In lieu of flowers, memorial gifts may be made to Central Presbyterian or Hospice of the Valley, 1510 E. Flower St., Phoenix, AZ 85014. To sign the online guest book and share your memories with the family, please visit www.legacy.com/obituaries/azcentral

Offer Hugs From Home Condolence for the family of PETERSEN, MYRON LEROY