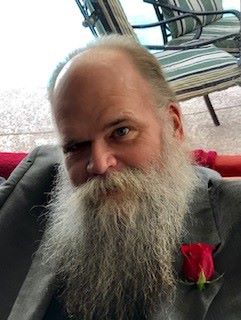 Brian was born April 23, 1964, while the family was living in Wayzata, MN. He is the sixth of seven children, and is survived by his mother, Mildred (Mickey), his siblings: Joseph (Patti), James, Cindy Leonard (Mike), Fr. Bradley Peterson, O. Carm., and Kerry Michelle LaMountain (Scott), as well as 17 nieces and nephews.
Preceding Brian in death were his father, Willard (Pete) Peterson, two brothers, Gregory and Gerard (Jardi) Peterson, and nephew Peter William Peterson.

After a brief time in Minnesota, the family relocated back to their native Iowa. In 1974 most of the family began its Arizona adventure, where Brian attended Phoenix College, falling in love with philosophy and the world of sound and poetry. During those years he volunteered at St. Agnes Church as sound tech for the music group and as a Core youth leader. Soon after graduating with his Associates of Arts degree, he continued his studies at University of Arizona and after embarked on his career with the Arizona Theatre Company, thus making Tucson his home. He wrote poetry for his family and friends, had wide interest in film, theatre, music, and the arts in general.

In 1992-1993 he was a full-time volunteer with Annunciation House in El Paso, Texas, and Ciudad Juarez, Mexico, serving the poor and migrant population of the area. He had a huge heart for the poor!

Brian was the resident sound designer with Arizona Theatre Company for 34 seasons, where he produced sound designs for over 90 productions, earning many ariZoni Awards and mentoring many young people throughout his career. His designs have been heard in many theatres throughout the country, where he is highly respected for his craft.

Brian, along with friends Matt DeVore and John Howard, followed their hearts to open Mission Coffee Imports in downtown Tucson just a couple of months after Brian’s cancer diagnosis last year. They have been roasting and serving delicious, “At Peak” coffee for years at local farmers markets and finally realized their dream of opening a shop.

Brian intentionally lived Jesus’ double command to love in many extraordinary and humble ways, touching so many people with his big heart. Please keep our family in your prayers during the days ahead as we celebrate Brian’s life and thank the Lord for taking him home where he no longer suffers. Brian will be sorely missed by his large family and by so many in Tucson. The family welcomes all to services, listed below.

Donations may be made in Brian’s honor to St. Agnes School or to Arizona Theatre Company.

Offer Hugs From Home Condolence for the family of PETERSON, BRIAN JEROME