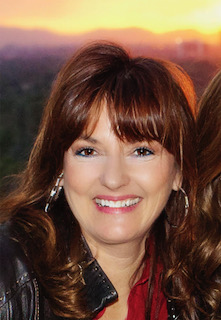 Lori Lynn Peterson, 57 of Phoenix, Arizona, passed away peacefully after a courageous battle with pancreatic cancer on September 25, 2018.
Lori was born on February 23, 1961 in Albuquerque, New Mexico, to Wilbert and Donna Runcorn. Lori and her family moved to Tucson, Arizona, in 1974, where she attended Sabino High School and began her artistic endeavors. In 1978, Lori’s father who worked for a local bank was unexpectedly transferred to Sun City, Arizona, in the middle of December, just after they had completed the construction of their new pool. Lori and her three siblings decided they were not going to move without having used that pool, so they jumped in the frigid waters just to say they swam in it. Her family then moved to Glendale, Arizona, where she would finish her high school studies at Greenway High School.
Lori has always had an artistic soul. Doing arts and crafts projects throughout her childhood led her to the University of Arizona, where she studied fine art and graphic design. After college she worked for a local architectural firm. There she met the love of her life and husband of 32 years, Mark Jon Peterson, who provided consulting engineering services for the architecture firm. Lori stepped into the role of mother at an early age, helping to provide guidance to two teenagers Melissa Beth (b. 1976) and Stuart Jon (b. 1979) in what was undoubtedly a tough task. Lori would later become a biological mother of two daughters to Heather Deanne (b. 1991) and Nichole Lindsey (b. 1994).
All along, the need to express herself in a creative way burned within her. She was introduced to the world of beads and fell in love. Working with natural stones and precious metal, she created one of a kind original jewelry for many years and loved every minute of it!
Lori lived life to the fullest, was never shy and always made room for new people in her life. Lori was an exceptional cook, gifted artistic designer, avid golfer and a graceful snow skier. Her kindness and selflessness turned into a passion for helping others. Lori co-chaired the Ladies 9 Hole Group and served on the Food and Beverage Committee for the Arizona Country Club. She was co-chair of the UMOM “Buckles & Bangles” event in 2016 and has been a fierce advocate for Colleen’s Dream Foundation. Lori also helped raise awareness for pancreatic cancer with the T-Gen Research Institute. More than anything, Lori loved spending time with friends and family.
Lori is survived by her husband Mark (68), parents Wil (83) and Donna (80), daughters Heather (26), Nichole (23) and Melissa Sanders (42), son Stuart (39), sisters Lani McBeth and Leslie Bosse, brother Warren Runcorn, brother-in-laws Dave (McBeth) and Paul (Bosse), sister-in-law Roxanne (Peterson), daughter-in-law Jennifer (Peterson), nieces and nephews Christine, Sean, Marc and Traci (Peterson), Jay and Lauren (McBeth), Damian, Alexis and Dakota (Bosse), McKenzie, Hunter and Madison (Runcorn), grandsons Cole and Lucas (Sanders) and Carter (Peterson). Lori was preceded in death by her brother-in-law, Kent Peterson.
While we will forever remember Lori’s beautiful smile, contagious laugh and love for her family and friends, we find comfort in knowing that she will forever be watching over us and protecting us from her heavenly home.
Memorial Services for Lori will be held on Friday, October 5, 2018 at Scottsdale Bible Church- Grace Chapel at 7601 E. Shea Blvd., Scottsdale at 11:00 A.M.

Offer Hugs From Home Condolence for the family of PETERSON, LORI LYNN