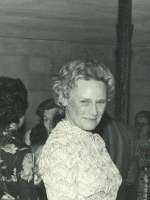 Cecily K. Polson, nee Sparrow, Lady Avebury, passed away Tuesday, October 18, 2011 in Phoenix. Born in Chesterfield, County of Derby, England, Cecily immigrated to the United States, July 4, 1946. Later she married Donald A. Polson, M.D. The couple had met during the Second World War, when Dr. Polson was a U.S. Army surgeon stationed in England, and Cecily was working for the Red Cross. In her early years, she attended St. Leonards boarding school in St. Andrews, Scotland, where she excelled in sports and the arts. Summers were spent in Wales, where she had a keen interest in painting, sailing and fly fishing. Later, she enjoyed driving in motor races. During her married life, Cecily was a homemaker. Her husband, Don, continued his practice of surgery in his hometown of Phoenix, Cecily and he were members of Paradise Valley Country Club, and White Mountain Country Club. An avid artist, Cecily was a member of Scottsdale Artists League. Also, she was involved with scholarships for student nurses, the AZ. Costume Institute and the English Speaking Union of the United States. She had a love of all animals, and enjoyed the outdoors at her summer cabin by Pinetop, Arizona. Cecily is survived by her daughter, Carolyn; son-in-law, Mark O’Malley; and grandson, Charles Polson Daniel. Husband, Don, and a step-son, Alan, preceded her in death. A Memorial Service will be held on Friday, November 18th, 2:00 pm, at Whitney & Murphy Funeral Home, 4800 E. Indian School Road, Phoenix. The family suggests contributions, in lieu of flowers, may be made in her name to Hospice of the Valley, 1510 E. Flower Street, Phoenix, AZ 85014; or to the Arizona Humane Society, 1521 W. Dobbins Road, Phoenix, AZ 85041.

Offer Hugs From Home Condolence for the family of POLSON, CECILY KATHLEEN