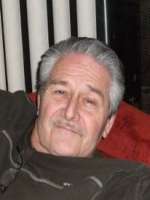 Danford Lester Post (Dan), 69, passed away after a long battle with cancer on Saturday, August 18, 2012 at his home in Phoenix, Arizona. Dan was born January 9, 1943 to Kenneth and Barbara (Bodman) Post in Rockland, Maine, the older of two children. He graduated from Skowhegan High School in Skowhegan, Maine in 1961. Dan served in the Navy at the Weymouth Naval Air Station in Weymouth, Massachusetts where he met his bride and the love of his life, Nancy Elaine (MacKenzie) Post. They were married in Avon, Massachusetts on May 3rd, 1966.
In 1966 Dan and Nancy moved to Maine where he began his long career working for AT&T. In 1972, Dan and Nancy built a house in Hudson, Maine where they raised their four children. While living in Hudson, Dan enjoyed hunting, gardening, blacksmithing and working on his farm. In October, 1994, Dan moved his family to Phoenix, Arizona. In 2005 Dan retired from the telephone company and started his own custom ironwork business, which he called “Turning Point”. He created many beautiful works of art including many custom residential gates around the valley. He also taught himself to paint and was a very prolific painter until his death in 2012. Dan was also known for being a devoted husband and father and for his dry sense of humor and kindness. Dan is survived by his father Kenneth Colby Post; wife, Nancy; Son, Kenneth (Chris) Post; Kellie (Christopher) Hebert; David Post; Brian Post; grandchildren, Cameron, Gabby, Alexis, Logan, Harper; cousins, Beverly Cantara, Dickie Miller; numerous nieces and nephews and his brother Donald Post. A Memorial Service and family visitation will be held on Sunday, September 2, 2012 from 10AM-4PM with the memorial tribute at 12:05PM (the time of his death) at his home in Phoenix, Arizona. In lieu of flowers, memorials may be made to Hospice of the Valley or the American Cancer Society. Those wishing to sign the guest book may do so online at www.danford-lester-post.forevermissed.com.

Offer Hugs From Home Condolence for the family of POST, DANFORD LESTER