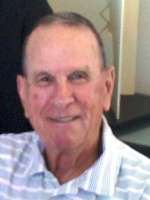 Gus Poulos was born in Miami, AZ April 6, 1933, the eighth of nine children. After a cardiac attack and multiple resuscitations, his generous heart refused to stop for three days, until his body had to rest May 13, 2010. He never regained consciousness, but we told him we loved him and trust he could comprehend. He was voted Most Popular at North High, where he was an All-State football player. A starting left guard at ASU from ’51 – ’54; he was the subject of numerous newspaper articles. He invited the entire football team to attend his sister’s wedding for a big, fat Greek meal. He was 5’ 8”, 180 pounds, but the way he retold stories of the glory days–as recently as last weekend–he was a 6’ 3”, 250 pound powerhouse. His tales grew taller with each telling, living up to his big-hearted, gregarious nature. Gus talked to anyone…and everyone knew Gus. He treated all people with equal regard. After graduating from ASU, Gus worked in the family business. Predeceased by his daughter, Cynthia, he is survived by his son, John; brother, Louis (Georgia) Poulos of Phoenix; sisters, Agopie (Harry) Pappas and Bessie (Carl) Suter of Southern California; many loving nieces and nephews; former wife and forever friend, Joan; his Irish family with whom he shared love, life and laughter, Virg, Scout and the extended Connelly clan; colleagues at Robson Communities, who called paramedics; and pals who met weekly, carrying on their friendship of sixty plus years. Visitation will be held Sunday, May 16, 2010 from 5:00 – 8:00 P.M. with Trisagion service at 6:00 P.M. at Whitney & Murphy Funeral Home, 4800 E. Indian School Rd., Phoenix. A Funeral Service will be held on Monday, May 17, 2010 at 10:00 A.M. at Holy Trinity Greek Orthodox Cathedral, 1973 E. Maryland, Phoenix. Donations may be made to the Holy Trinity Building Fund, 1973 E. Maryland, Phoenix, 85016.

Offer Hugs From Home Condolence for the family of POULOS, GUS