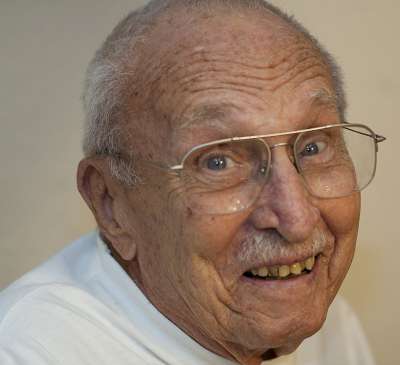 The Powers’ patriarch has passed on.  He was our leader, our guide through life.  George put his three children through medical school, serving as mentor for all that is important in medicine and in life. He died at home July 17, 2015 surrounded by his extended family. Born in Little River, Kansas on September 22, 1919, his father, a medical general practitioner died when George was 14.  Along with his mother and sister they survived the depression although it left a lasting mark.  At least in his later years he no longer felt the need to separate the two-ply toilet paper. He met the love of his life, Dorothy, at the University of Kansas, and they married in 1943.  A member of the Greatest Generation, he served in the Navy as a doctor and saw the end of WWII.  After discharge he set up a general practice in Shenandoah, Iowa, where he and Dorothy raised their family. A life changing interlude occurred in 1954 when the Navy called and he was assigned to additional service on Guam.  The family experienced a life radically different from Iowa.  We learned the call of the ocean. In 1970 they left Iowa for Phoenix so George could start a residency in psychiatry.  Phoenix was chosen because of its proximity to the ocean.  George had studied the map and found that the Sea of Cortez was quite accessible. In short order trips to Puerto Penasco followed. His experiences as a boatman are family legends, culminating in a shipwreck on Bird Island (appropriately Isla San Jorge) where he and Dorothy spent their anniversary night along with Jerry and Karen battling for space among the sea lions and various birds that deposited their lice on the unwilling recipients.  He did return to the foundering boat to retrieve his anniversary present for Dorothy. George served as the first medical director for the psychiatric crisis center (psychiatric emergency room) for Maricopa County Medical Center.  His general medical and psychiatric backgrounds served the community well.  George and Dorothy traveled widely, often with family in tow.  We have benefitted from their vision.  The family continues to visit old and new haunts following their example.  There is a large world out there waiting to be enjoyed.  Dorothy passed in 2002 although George let it be known he planned on going first.  Still, he held up, continuing to be a magnet for the family gatherings.  As he approached 96y/o, still living at home, he observed that the very senior golden years and their accumulating infirmities were not all that great.  Yet he carried on in good humor. This in a man who contracted polio from a patient in 1948 and who was sent home from Guam to die when he was found to have an incurable malignancy.  It appears he beat the odds.  He continued living under the specter of imminent demise for 60 years!  He is survived by his children Michael Powers MD, (Linda), Pam Powers MD (Mike Pierce), Jerry Powers MD, (Karen); grandchildren Wendy Borchert (Shane), Megan Galope (Joe), Ryan Powers, Katy Powers MD, John Gallagher (Alison), Meg Plomondon (Dennis); and great-grandchildren Ray and Jeff Borchert.  In gratitude to his caregivers in recent years, especially his ex officio granddaughter and Caregiver in Chief Allison Summerday.  Their kind attention allowed him to remain at home where he enjoyed reading, watching sports on television, awaiting happy hour and reliving the memories of a life well lived.  A private family service will be held -George outlived most of his friends- followed by interment with Dorothy at the National Memorial Cemetery of Arizona.  He will continue to live on in our collective memories.  In lieu of flowers please send donations to Planned Parenthood Arizona, Inc., Administrative Office, PO Box 47240, Phx., AZ 85068 or www.donate@ppaz.org

Offer Hugs From Home Condolence for the family of POWERS, GEORGE HAROLD