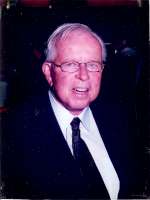 85, passed away peacefully Sunday, August 21st, 2011. Born September 15, 1925 in Des Moines, Iowa where he grew up, met and married Alice in 1947. He worked at J. A. Powers Bakery as a baker along his father’s side and as a baker in The Air Force. John and Alice moved west to Phoenix in 1955. They started and built a successful steel fabrication and manufacturing business, Powers Steel & Wire Products in Phoenix and then Powers Steel Inc. in Florida. He invented several innovative patents for the construction industry. He is survived by his wife and best friend of 64 years, Alice Powers. Five children; John Powers III, Jeffrey Powers and wife Lisa, Janet Powers, Patricia Powers Bada and husband Michael, Robert Powers, Nephew William Powers and wife Elizabeth. He is also survived by ten grand children, six great grand children and two younger brothers James and Robert Powers. Hospice of The Valley cared for John and were wonderful to him during his last days. Any remembrances in his name would be greatly appreciated to Hospice of The Valley. John Powers was one of a kind with a heart full compassion and love. He will be greatly missed. Private services have already been held.

Offer Hugs From Home Condolence for the family of POWERS, JOHN A., JR