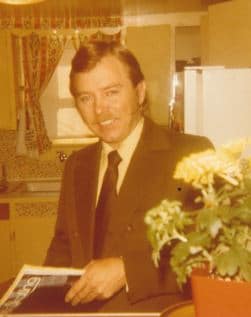 John Lawrence “Larry” Powers, 80, passed away peacefully with his family by his side on August 30, 2021. Larry is survived by Barbara J. Powers and his four children Carl, JL, Paula and Damon aka “Tommy”. Larry also leaves behind 9 grandchildren and 5 great grandchildren. Also left behind are his older brother Tommy Powers and his younger sister Pam Phelps as well as many nephews, nieces and cousins. The family would like to add an additional mention to Christine Reynard and her family.
Larry was born and raised in Phoenix, attending Creighton Elementary and Phoenix Union High School. During his early professional career, he worked for companies such as Yardley and Max Factor. Soon after he started companies of his own, Phoenix Motor Co., Powers Cylinderhead and Powers Quality Fuel. A lifelong Phoenician he eventually retired after being elected to three terms as Constable for East Phoenix Justice Court. During his retirement years he was avid collector of antique and hot rod cards and watched a lot of NASCAR, PGA and Gunsmoke. Larry will be greatly missed by his family and friends.

Offer Hugs From Home Condolence for the family of POWERS, JOHN LAWRENCE “LARRY”