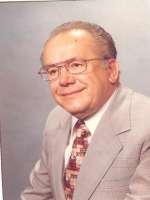 After battling several health hurdles over the past seven years, Milo V. Price never gave up or complained and he maintained his bearing as he was taught from his military experience. He died in the loving arms of God with his loving wife at his side on the morning of September 8 in Scottsdale, AZ.

Milo was born on May 15, 1924 in the former Yugoslavia. As a young boy in 1936, he traveled alone with a destination tag pinned to his coat reading: “Jarbidge, Nevada. Uncle: John Price”. His father, Vaso Prica, was a prisoner of war in 1917 that was captured by the Russians. Vaso was unable to support a wife and four children off of the meager earnings of a small farm and they wanted Milo to pursue academic endeavors and to live the American dream.

Not knowing any English, Milo used a Serbo-Croatian/English dictionary in order to communicate with his fifth grade teacher. In his second year of schooling, he completed sixth and seventh grades simultaneously. At the age of 16, Milo worked in the Jarbidge mine. Milo saved his $6.00 per day earning and purchased his first car – a 1939 Buick. Milo graduated from Elko County High School in Elko, Nevada at the top of his class. Prior to beginning a higher education, Milo was drafted into the U. S. Army during World War II where he was sent to Europe to fight the next big battle in his life – the Battle of the Bulge. He attained several medals and honors during his service including the Purple Heart and Bronze Star. While in Europe following the war, he returned to his birth village to find that it had been burned to the ground, his mother and three sisters killed, and only his father and brother were survivers.

Milo returned to the U. S. and furthered his education at the University of Nevada with a degree in economics and political science followed by his Juris Doctor at George Washington University where he choose public service as his career ambition. He worked for the Department of Justice for seven years and then worked for the National Labor Relations Board (NLRB) where he started as a trial attorney, Chief Council and ultimately served as Regional Director for the southwest, in Phoenix, Arizona. As the Regional Director, he was nearly chosen as Chairman of the NLRB for the Reagan Administration until the Teamsters Union vehemently opposed his appointment. He retired shortly after and maintained a home in Scottsdale and Jarbidge.

Milo is survived by his wife, Dusanka nee Avramovic, and her two children: Kristina Golubovic (Daniel Martino), Aleksandra (Andrew) Bergen; and two granddaughters Mila Golubovic-Dawson and Kaelyn Bergen; nephew Milovan Prica and several distant relatives in Croatia and Serbia. He will especially be missed by his four-legged friend Jacky. He was preceded in death by his first wife, Alice Price nee Higgins, his siblings, parents, aunts and uncles.

Milo’s life will be celebrated with a Viewing on Saturday, September 17 from 5-8 p.m. at Whitney & Murphy Funeral Home, 4800 E. Indian School Road, Phoenix, Arizona (www.whitneymurphyfuneralhome.com) with a Memorial Service at 6:00 p.m. prior to reaching his final resting place at Arlington National Cemetery. Donations may be made to St. Sava Serbian Orthodox Church (www.stsava.com) or the US Wounded Soldier’s Fund (www.uswoundedsoldiers.com).

Offer Hugs From Home Condolence for the family of PRICE, MILO V