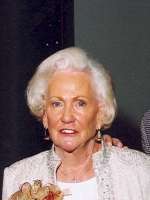 Suzanne Price Propstra, 88, an Arizona Native, who was quick with a funny saying to fit any occasion passed away July 17, 2011 in Phoenix, Arizona. She was born on November 6, 1922 to Arthur & Louise Price in Chandler, AZ., graduating from Chandler High School. She attended Mills College and the U of A, and joined the Kappa Kappa Gamma Sorority. While at the U of A she met the love of her life, a handsome Fiji, Jack Propstra. They were married on May 12, 1943. Suzanne was an accomplished sports woman. She was elected into the Chandler Sports Hall of Fame 2005 and played tennis and golf, shooting 3 holes in one on her favorite courses, the White Mountain Country Club and Phoenix Country Club. Summering in the White Mountains, attending St. Barnabus Episcopal Church on the Desert and loyally supporting the community came second to love of family. She was a dedicated wife, mother, grandmother and great-grandmother. Predeceased by her husband Jack, she is survived by her children, John Propstra, Diane Willian, and Marilyn Propstra; 6 grandchildren and 16 great-grandchildren and sister Harriett Fullerton. Private family services are pending. In lieu of flowers donations in her memory may be made to the Arizona Cancer Center, University of Arizona, 1515 North Campbell Avenue, Tucson, AZ 85724. Arrangements entrusted to Whitney & Murphy Funeral Home. Post Scripts by Posey.

Offer Hugs From Home Condolence for the family of PROPSTRA, SUZANNE PRICE