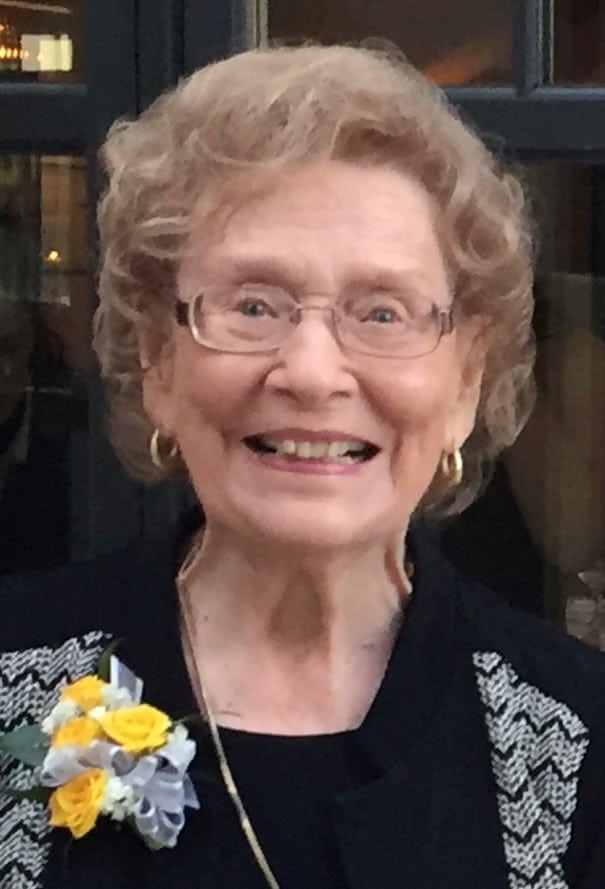 Mary Pulido peacefully passed into eternity at the age of 93. She was a devoted wife, mother, grandmother, great grandmother, and daughter of Christ. She is preceded in death by her father Anthony, her mother Maria, and her two sisters, Agnes (“Aggie”) and Veronica.

Mary came into this world as the youngest daughter of Anthony & Maria (Kitzka) Svatos in Edenborn, PA. She grew up in Akron, OH where she began her college studies at the age of 16. Two years later, she moved with her sister to Tucson, AZ, where she met her soul mate Charles (“Charlie”) Pulido at the Newman Center at the University of Arizona.

Aside from her devoted husband of almost 70 years, Mary is survived by their 6 children, Mark (Donna Walker) of Yountville, CA, David (Debra) of Cape Elizabeth, ME, Pam of Encinitas, CA, Greg (Cindy) of Austin, TX, Susie (Annie) of Phoenix, AZ, and Diana of Dahlonega, GA, their 8 grandchildren, Andrew, Jessica, Elizabeth (Brian), Maria, Michael, Emily, Matthew, and Chas and great-granddaughter Emma. Mary is also survived by her brother-in-law and sister-in-law Mickey (Fernando) and Pat Pulido of Phoenix, as well as numerous nieces and nephews.

In addition to raising her 6 children, Mary was involved in many volunteer activities throughout her life, including chairing the Women’s Church Organization at Mother of Sorrows Catholic Church (Tucson) and serving as President of St. Theresa Catholic Church School Association (Phoenix). In addition, Mary supported her husband Charlie’s pharmacy profession including becoming the first woman to serve as the State President of the Arizona Auxiliary Pharmaceutical Association and the leader of both the Tucson and Phoenix Chapters. Mary also was involved with each of her children in both the Girls and Boys Scouts organizations.

Beyond her organizational involvement and support in her husband’s profession and her children’s activities, Mary was deeply involved in her Catholic faith. She was a Lector, Eucharistic Minister and a Sunday school teacher for many years at St. Theresa’s Catholic Church in Phoenix. She also served as a Eucharistic Minister and Concierge at St. Patrick Catholic Church in Scottsdale where she, along with her husband, have been members for the past 28 years. Mary redefined what it meant, “to live life to the fullest,” always taking on more activities and unselfishly volunteering her time to worthy causes.

Once her youngest child was in college and at the age of 57, Mary enrolled in school and became an international travel consultant where she traveled the world with Charlie visiting 6 continents and over 50 countries. Fittingly, she led 3 large group trips on tours of the Holy Land and a pilgrimage to Mexico City.

Mary was the eternal optimist and an inspiration to all her family and friends. Her spirituality, devotion to her family and gentle loving personality touched many lives.

For those not able to attend services in person on Wednesday at 6pm participation via live streaming video will be available at: https://www.facebook.com/WhitneyMurphyFH/live/
The Mass on Thursday at 11am will be available to be viewed on Zoom at:
https://us02web.zoom.us/j/8682659039?pwd=YnlvRjdMRG9jaVFEN2RBT2IIQTh2dz09 Meeting ID: 868 265 9039, Passcode: 1234

In lieu of flowers, donations can be made to The Mount Claret Retreat Center in care of Msg. John McMahon Endowment Fund, 4633 N. 54th St., Phoenix, AZ.
Condolences may be expressed at www.whitneymurphyfuneralhome.com

Offer Hugs From Home Condolence for the family of PULIDO, MARY MARGARET SVATOS