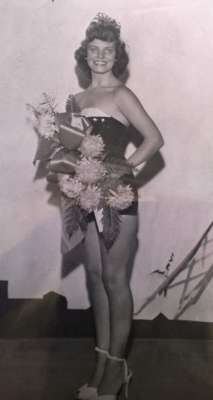 Carol Ann Quaranta (Lockhart), 78, of Huntington, WVA, joined the angels in Heaven on August 22, 2014 in Phoenix. She is preceded in death by her mother Ruby and Father William Lockhart, her husband Pat Quaranta, Jr., Sister Helen Conway and Brother Howard Lockhart. Carol was born in Huntington to Ruby and William Lockhart on August 11, 1936 and was the youngest of her siblings Bill, Howard and Helen (Conway). She was a stunning young woman who married the love of her life, Pat Quaranta Jr. in 1954, winning the title of Mrs. Canoga Park just prior to departing her hometown for a new life in Phoenix, AZ. They settled in Phoenix in 1957 where she began an exceptional life as loving wife and business partner to husband Pat and adoring mother to her children, Sharon, Pat and Angie. She was engaged in her children’s lives in every way a mother could becoming a regular figure at Creighton Elementary school where Carol would volunteer tirelessly throughout the school year joining on field trips, chaperoning school dances, serving as homeroom mother and manning the “pop stand” during summer baseball season. Carol loved sports of all kinds, but was a passionate Phoenix Suns fan and original season ticket holder. She was an amazingly talented woman ranging from a meticulous seamstress, keen gambler and wicked good bowler. While a feisty and strong-willed woman, she was also gracious and giving organizing many charity events at the Arizona American Italian Club and opening her home to many family members and friends as a short term sanctuary. But far and above, her biggest talent lie in her skill as a remarkable cook, especially Italian food. Mom would cook for over 20 people on almost a weekly basis, and often with her holiday feasts the number would double. Her pies, cakes and cupcakes were renown and her spaghetti sauce and bbq chicken was second to none. She approached her cooking as she did with everything in life – love, passion and accomplishment. Carol is survived by the pride and joy of her life, her children Sharon Steeley (Quaranta), Pat Quaranta (wife Kehlee) and Angie Quaranta and grandchildren Ty Wilson (wife Cindy), Brandon Wilson (wife Julie) Chris Wilson (wife Jerrae), Alyssa Quaranta, Jessica Call (Husband Chase), Sarah Quaranta and Kassidee Quaranta. She was blessed with 7 great-grandchildren: Grady, Riley, Grace, Carmella, Statton, Giada and Brecken. Over 20 nephew and nieces her precious pup Pepper. Visitation will be held on Wednesday, August 27, 2014 at 6:00pm with a Rosary at 7:00pm at Whitney & Murphy Funeral Home, 4800 E. Indian School Road, Phoenix. Funeral Mass will be Thursday, August 28, at 10:00am at St. Francis Xavier Catholic Church, 4715 N. Central Avenue, Phoenix. Entombment will follow at St. Francis Catholic Cemetery. A reception to further celebrate her life will be at the home of Brandon and Julie Wilson immediately following the cemetery. Memorial donations may be made to the AZ Humane Society and the Arthritis Foundation-Arizona Branch. The family also wishes to extend their gratitude to Hospice of the Valley for their support in her final days.

Offer Hugs From Home Condolence for the family of QUARANTA, CAROL ANN (LOCKHART)