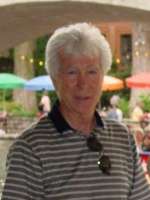 Roland A. Quaranta, 82 of Phoenix, AZ passed away peacefully on Tuesday, August 20, 2013 at the Terraces Skilled Nursing Facility in Phoenix, AZ.  He was born on November 8, 1930 in Follansbee, WV, a son of the late Pasquale and Elvira Quaranta, of Rosetta, Italy.  Roland attended St. Anthony’s Catholic elementary school and graduated from Catholic Central High School in Steubenville, Ohio, in 1948. He spent two years in Miami, Florida working in the construction trades.  He joined the United States Air Force in 1950 and spent a four year tour of duty in London, England.  Roland attended Marshall University in Huntington, WV and transferred to West Virginia University where he earned his B.A. degree in Education.  He taught a year in high school and then joined the sales organization of Weirton Steel Company.   He then moved to Corona, California and was employed with the General Dynamics Corporation as a purchasing agent.  A few years later he joined the sales staff of McKesson Chemical Corporation and following a successful career in sales servicing major customers in Hollywood, Santa Barbara, and through Northern California, he retired and moved to Phoenix, Arizona.  Following retirement he started his own sales company RQ Enterprises in Phoenix, AZ, which he successfully managed.  Roland had a great sense of humor and loved spending time with his family, relatives and friends.  He spent many hours volunteering services to St. Vincent De Paul, the Knights of Columbus food stand at the Cardinals football games, the parish men’s club, and Andre House. He loved to cook, loved music and enjoyed dancing. Roland is survived by his daughter Kelly McClenen, three grandchildren, Macey, Trace, and Cayce; daughter Kristen Quaranta, brother Dino Quaranta and sister Edna Camarra.  A Memorial Mass will be held at St. Francis Xavier Catholic Church on Monday, August 26, 2013 at 10:00 a.m., which is located at 4715 N. Central Avenue, Phoenix.   Memorial contributions may be made to Hospice of the Valley, 1510 E. Flower Street, Phoenix, AZ 85014.   The family would like to thank the staff of The Terraces Skilled Nursing Facility and the Staff of Hospice of the Valley.

Offer Hugs From Home Condolence for the family of QUARANTA, ROLAND ANTHONY