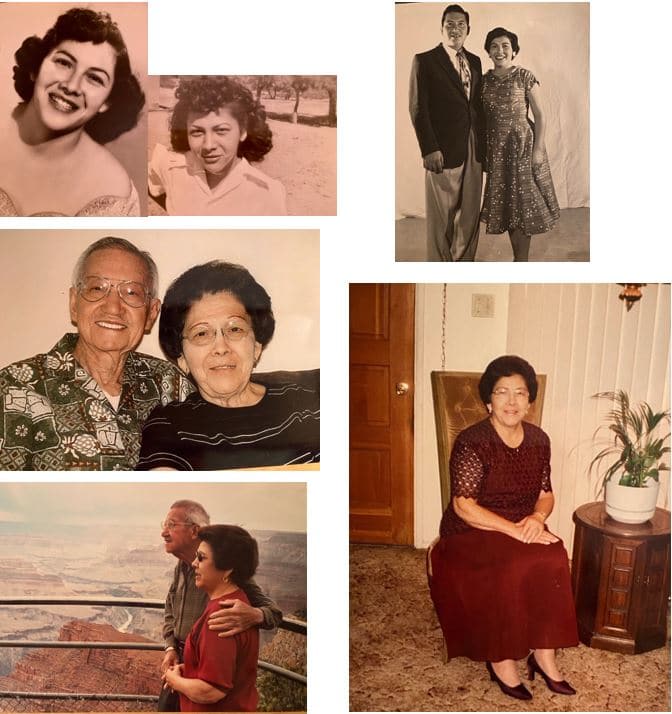 Christine Ledón Ramirez, 91, of Phoenix, Arizona passed away peacefully on June 18, 2020. She was preceded in death by her husband of 63 years, Robert Ruiz Ramirez in 2012.

Christine was born in Phoenix on July 24, 1928 to Feliciano and Natalia Ledón. She attended Monroe Elementary School and Phoenix Union High School. She was married to Robert R. Ramirez at Immaculate Heart Church in Phoenix on June 19, 1949. After having daughter Donna Terese (“Terri”) and son Robert Jr. (“Bobby”) she later attended Lamson Business College to study bookkeeping and computer data entry and worked for a time in the insurance industry before having twin sons Peter and Paul and becoming a full-time stay-at-home mother. She enjoyed cooking, sewing, and working in her large rose garden, as well as singing and entertaining guests at many holiday parties and family get-togethers. She also continued to do bookkeeping for the family business for many years.

She is survived by her twin sons, Peter and Paul (Betty), grandchildren Raymond (Amy), Jessica (Tim), Gerardo (Maria) and Elisabeth (Corey), along with 16 great-grandchildren.

Visitation will be held on Friday, June 26, 2020 from 6:00 -8:00 P.M. at Whitney & Murphy Funeral Home, 4800 E. Indian School Road, Phoenix. Funeral Service will be held on Saturday, June 27, 2020 at 9:00 A.M. at Whitney & Murphy Funeral Home, with a Graveside Service following at St. Francis Catholic Cemetery. Condolences and Hugs from Home may be expressed at www.whitneymurphyfuneralhome.com

Offer Hugs From Home Condolence for the family of RAMIREZ, CHRISTINE LEDÓN