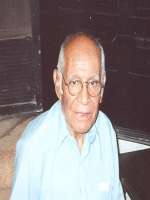 Passed away on December 14, 2010 at the age of 87. He was born in Litchfield, AZ on July 6, 1923. He was preceded in death by his wife Josie Ramirez, grandson David A. Lucero, parents Eva and Gregorio Ramirez, sister Dolores Duran and brother Manuel Ramirez. Survirors include his daughters Marie (Babie) Ramirez, Velia Peiz, Rachel Casillas, Roseann Baker, Yolanda Ramirez; son Ruben Ramirez; 2 sisters, 3 brothers, 10 grandchildren, 15 great-grandchildren and 1 great, grandchild. He was very proud to have served his country during the 2nd World War, enlisting in the U.S. Army
when he was 17 years old. He will be remembered for his strength, endless energy, kindness and great sense of humor.
Visitation will be from 9:30-10:30am, Rosary at 10:30am with a Funeral Mass at 11am, Monday, December 20th at St. Agnes Catholic Church, 1954 N. 24th Street, Phoenix. Interment will follow at St. Francis Catholic Cemetery. In lieu of flowers, the family requests donations be made to Hospice of the Valley, Brighton Gardens, 6001 E. Thomas Road, Scottsdale, AZ 85251. Arrangements entrusted to Whitney & Murphy Funeral Home.

Offer Hugs From Home Condolence for the family of RAMIREZ, GREGORIO (Greg) A.