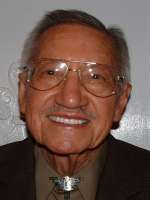 Robert Ruiz (“Bob”) Ramirez, 85, of Phoenix, left this world on Saturday, September 1st, 2012, to be magnificently reunited with his eldest son Robert Ramirez, Jr.
in heaven where their Savior the Lord Jesus Christ has prepared a special place for them. Robert lived a long and industrious life, most of which was spent in Phoenix and 63 years of which he spent married to his devoted wife, Maria Christina Ledon de Ramirez (Christine). Robert was born and raised in Phoenix, the son of Mr. and Mrs. Eduardo and Petra Ramirez. He attended Monroe Elementary School and graduated from Phoenix Union High School in 1944. Upon graduating, he enlisted in the Navy and served as a medical corpsman for the duration of World War II and later, when called back to duty, during the Korean War. He studied electrical and electronics technology and went on to a career that began as an electrical utilities lineman and ended in medical equipment sales and service, both as a representative and as a self-employed business owner, from which he retired in 2006. Robert was a longtime member of the VFW, the American Legion and Mid-Town Optimists. He was also a charter member, co-founder and president of “El Grupo,” a close-knit group of Latino Phoenicians who have held monthly breakfast meetings with various guest speakers and occasional special events at locations in west Phoenix for a number of years. Robert was a long-time member of St. Theresa parish along with his family, and in recent years came to love and enjoy worshipping with his daughter and son-in-law at Faith Church of the Valley in Chandler. In addition to his wife Christine, Robert is survived by his daughter Terri and twin sons, Peter and Paul, younger brother Eddie Jr., grandchildren Raymond, Jessica, Gerardo and Elisabeth, and 11 great-grandchildren. Visitation will be held from 6:00pm to 8:00pm on Friday, September 7th, at Whitney & Murphy Funeral Home, 4800 E. Indian School Rd., Phoenix. Funeral Service will be at 9:30am on Saturday, September 8th at St. Agnes Catholic Church, 1954 N. 24th Street, Phoenix. Burial with military honors will follow at St. Francis Cemetery, 2033 N. 48th Street, Phoenix. Reception at St. Agnes Catholic Church.

Offer Hugs From Home Condolence for the family of RAMIREZ, ROBERT RUIZ