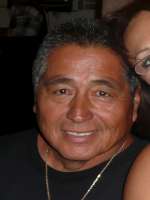 58, devoted Son, Husband, Father, Tata and Friend was called home to the Lord on March 14, 2010. He was born on January 30, 1952 in Phoenix, AZ to Ruben and Enriqueta (Kate) Ramos. He is preceded in death by his mother, father, grandparents, father-in-law, two brother-in-laws and his dear friend Pilar Avila. He is survived by 3 brothers, one sister, his Brother Rudy Ramos, Wife Frances (Chica Ruiz) Ramos, Son Edward (Robin) Mendivil, Daughter Jeanette (Marcus) Chavez, also Step-Son Anthony Arballo, Granddaughters Alexis, Marisa, Brooklyn and Gulianna, only Grandson Marcus and Goddaughter Veronica Encinas. Eddie worked for the City of Phoenix Water Services department for 31 ½ years when he retired to begin enjoying life with his grandchildren and wife. He found his passion in Harley Davidsons’ and spent the last 5 years participating in weekend rides with his friends alongside his wife Frances. We love you; you’ll be in our hearts forever, next time we hear the thunder roar we know its Eddie revving up his Harley in Heaven. Our dad’s celebration of life will be on Saturday, March 20, 2010 at St. Mary’s Basilica, located at 231 North 3rd Street Phoenix, AZ 85004. Visitation 9–11 am, Rosary 10 am and Funeral Mass 11 am. Interment immediately following at Resthaven Cemetery, 6290 West Northern Glendale, AZ 85301. Flowers can be sent to St. Mary’s Basilica 231 North 3rd Street Phoenix, AZ 85004. A bank account has been setup at Chase Bank under Eddie Ramos, donations can be made at any Chase Bank.

Offer Hugs From Home Condolence for the family of RAMOS, Eddie Padilla