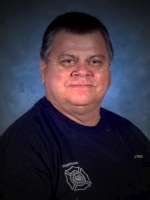 61, of Phoenix, AZ passed away May 17, 2013 after a brief battle with pancreatic cancer. He was surrounded by family and faithful friends in his final moments.  Mike was born in Los Angeles, CA on December 25, 1951 but moved to Phoenix, AZ at an early age.  Mike was an alumni of South Mountain High School class of 1969, a “Rebel” for life.  “Raz” was hired with the City of Phoenix Fire Department on March 22, 1976 and retired May 31, 2011 with 35 years of service, he loved being a firefighter and considered his brothers and sisters of the department as a

second family.  His passions included skiing, traveling, cooking, and movie watching. He is survived by his children Chris, Monica, Jennifer and Alissa Razo, 16 grandchildren, 1 great grandchild, 2 brothers, 4 sisters, plus many nieces and nephews. Mike was preceded in death by his parents Dora and Manuel Razo. Mike dedicated his life to his children, grandchildren and city. His family is requesting that you join us in a celebration of life, to be held on Tuesday, May 28 from 5PM to 8PM with a

Offer Hugs From Home Condolence for the family of RAZO, JESUS MICHAEL