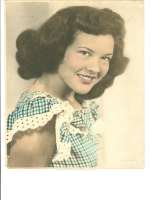 Azerlean “Jeannette” Reed
80, passed away November 29, 2009. Jeannette was born August 18, 1929, in Chun Chula, Alabama. She moved with her family to Phoenix, Arizona when she was 3 years-old. Jeannette graduated from Phoenix Union High School and later attended the Nursing Program at Arizona State University. After graduation, she worked as a psychiatric nurse. She was later hired by the Phoenix Police Department and became the first woman police officer for the City of Phoenix to “walk a beat.” Jeannette retired in 1975 as a detective for the department after a long rewarding career. She became involved in the Boy Scouts of America in 1976 and would continue her leadership role with Troop 407 for 33 years. Most recently, Jeannette worked part-time as a curator at the Phoenix Police Museum. Jeannette loved hiking, cooking, decorating for holidays, traveling, sewing, watching sports, and most importantly, reading. Her home was always welcoming and inviting and anyone and everyone who dropped in could always find a home- cooked meal and stimulating conversation. She took you under her wing if you were in need physically or spiritually. She was very generous to everyone around her and touched many lives with her selflessness. Jeannette is preceded in death by her parents Bufkin and Esther Orso and by siblings Flemon, Albert, Bufkin, William, Charles, and James Orso, Betty Miller, Delfina Sutherland, Gladys Sanders, and Rhue Stevenson. She is survived by her husband of 61 years Charles Reed, children Diane Vaughn, John Reed, Donna Reed, Jimi Fitzgibbon, and Joseph Reed, grandchildren Nicole Vaughn, Jeannette Vaughn-Dotterer, Michael Gepford, Michelle Reed, Randy and Robert McGee, Rachel and Logan Reed, great-grandchildren Stephanie Taylor, Jeffrey and Andrew Turman, Thomas, Tatum, and Renn Dotterer, Shaune and Shaunte Reed, Zachary McGee, and great great-grandchild Julian Taylor. Memorial Mass will be December 5, 2009 at 9:45 am at St. Gregory Catholic Church, 3424 North 18th Avenue, Phoenix, Arizona.

Offer Hugs From Home Condolence for the family of REED, AZERLEAN “Jeannette”