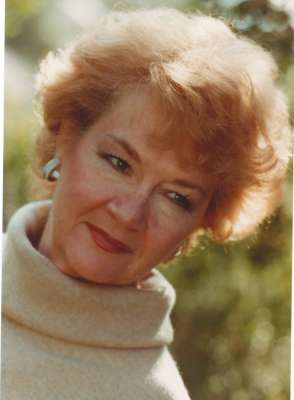 Mary Louise Reed passed away peacefully on June 17th, 2014 in Scottsdale, with loving family by her side. Mary Lou was born March 1st, 1928, to John and Eleanor Thompson in Hannibal, NY, a small farming community in Oswego County.  One of six siblings, her education began in a one-room schoolhouse taught by her two aunts. Mary Lou was an exceptional student and became a Quiz Kid panelist in the mid 40’s. Also a versatile music talent, she played the drums, piano, and violin, and was awarded a music scholarship to college but couldn’t pursue it due to family responsibilities. Mary Lou moved to Phoenix in the late 40’s where she met Carl Herron while teaching ballroom lessons at the Arthur Murray Dance Studio. They soon married and moved to St. Louis, MO, where they had the first of their six children. Later relocated to Kansas City, KS, Mary Lou taught weekly ballroom classes in their basement, joined the Kansas City Young Matrons, became involved in community theatre, and devotedly raised her army of children. She graciously opened her doors to all the children in the neighborhood and had the best “dress up” trunk around. Widowed in 1962, Mary Lou remarried to Tommy Reed, moved to Phoenix, AZ, and soon had daughter, Aimee.  Mary Lou eventually joined Tommy at Southwest Booking Agency as Vice President, booking orchestras, bands, and renowned musical talent for conferences, parties, balls, and conventions throughout Phoenix and the Southwest. She was also very involved with Friends of the Foundation for Blind Children and Stage Belles for many years. Besides her children and grandchildren, her passions were golf, crossword puzzles, reading, politics, music, and bridge receiving the Life Master Certificate from the American Contract Bridge League for which she was so very proud. Mary Lou lived her life with grace, dignity, and style, and we will forever remember her with the stunning inner and outer beauty she possessed. She is survived by her sister, Marjorie Cole; brother David Thompson; son Carl Reed; daughters Carla Silva, Lisa Petello, Shanna Reed O’Hara, Molly Berry, Aimee McWilliams, and 14 beloved grandchildren. She was preceded in death by her beautiful daughter Mari Lou Shulkin; brothers Gordon and John Thompson; sister Joan Markley, and husbands Carl Herron and Tommy Reed.  A memorial service will be held Saturday, June 28th, 2014 at 2 pm, at Whitney & Murphy Funeral Home, 4800 E. Indian School Road, Phoenix, AZ 85018. If you feel moved to make a donation, Mary Lou deeply admired the work of Smile Train.

Offer Hugs From Home Condolence for the family of REED, MARY LOUISE