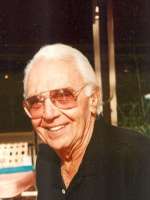 A beloved husband, father and grandfather passed away on Friday, February 10, 2012. Legendary bandleader Tommy Reed, born Thomas Manuel Enos, died 98 years young surrounded by his family after complications from a broken hip and shoulder. Tommy was born in Valona, California on June 9, 1913 to “Dolly” and Manuel Enos. Mildred and Manuel, his siblings, would later follow. Speaking only Portugese, he started school at 7 at an all boys Jesuit school near his home. Tommy had two childhood passions, baseball and music. He briefly played AAA baseball, went to college on a baseball scholarship but at 19 let it all go to join Joe Venuti’s band playing sax for a young singer named Bing Crosby. Tommy had a long, successful career as a bandleader and musician performing with many name bands such as Dick Jurgens and Russ Morgan, before and after the war, but at 28 he enlisted in the Marine Corps, serving from 1942-1945. He fought in the Pacific Theatre earning a Purple Heart among other honors, for his actions in Tarawa and Guadalcanal. Tommy Reed and his Orchestra were renowned throughout the Valley where they played for many years, and his Southwest Booking Agency was a premier supplier of quality entertainment since the mid 60’s. Tommy will be remembered for his integrity, talents, loyalty, strong faith, discipline, beautiful heart and his unceasing love for his wife of 47 years, and their children. He is survived by his wife, Mary Lou; their seven children; Carla, Lisa, Shanna, Molly, Mari Lou, Carl, Aimee, 14 grandchildren, sister Mildred, and treasured friends whose lives he touched. We can still hear him say, “love what you do, do what you love”, “one day at a time”, and “Semper Fi, buddy”. We will forever miss you Dad, Papa Tom, my dearest love. A Memorial Service will be held Thursday, February 16, 2012 at 1:30 PM at Whitney & Murphy Funeral Home, 4800 E. Indian School Rd., Phoenix, AZ. Memorial donation to the Disabled American Veterans, 3333 N. Central Ave. Suite 1053, Phoenix, AZ 85021

Offer Hugs From Home Condolence for the family of REED, TOMMY