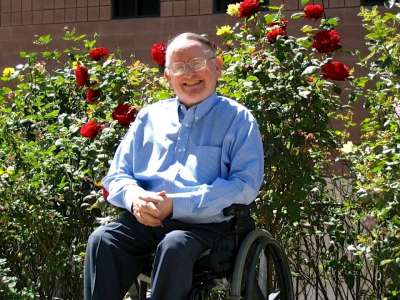 A true hero to many, Thomas J. Reilly, 72, of Phoenix, passed peacefully into the Lord’s good graces on Thursday, April 10, 2014.  Tom, the son of William P. and Mary Reilly, was born in Washington, D.C. in 1942.  Although having been stricken by the ravages of polio in his early teens, Tom went on to attend Brophy College Preparatory and Central High School in Phoenix.  Tom next accepted the challenge of attending college in Northern California where he completed his undergraduate studies at Santa Clara University and was the recipient of the Nobili Medal signifying the outstanding male graduate in academic performance, personal character, school activities and constructive contributions to Santa Clara University.  Tom then attended law school and obtained his law degree from Stanford University with honors, which included his service as an editor of the Stanford Law Review.

After graduating from law school, Tom moved back to Phoenix and accepted a clerkship position with Judge Walter Craig of the United States District Court for the District of Arizona.  Upon completing such clerkship, Tom was employed by the law firm of Snell & Wilmer, where he practiced corporate and tax law for approximately 20 years and, among many other activities, served as a member of his firm’s Executive Committee.

After deciding to retire from the practice of law for health related reasons, Tom accepted a new and important challenge by deciding to become involved in the lives of high school students.  Tom became the proverbial jack of all trades at St. Mary’s Catholic High School in Phoenix serving in a variety of roles, including financial assistant, college counselor, and scholarship assistance coordinator, helping countless numbers of students with their education and futures.

Tom lived a life of charity and used his real world experiences and force of will to obtain aid for those whom he felt were in need of a helping hand.  His contributions to his community and his family are too many to list and he will long be remembered by those who were personally touched by his love, generosity, and his kindness.

Tom loved sports of all kinds, especially Arizona team sports.  He was fully invested in St. Mary’s athletic teams and attended many games while he was still able to do so. When it became more of a physical struggle for him to attend St. Mary’s games, he requested constant updates from his family and friends.  He loved and lived by the school’s motto, “We may not be the biggest, but we have a firm conviction that we can be the best.”

Facebook became such a wonderful device for Tom to reconnect with family, friends and past students. It became an avenue to express his common sense approach to life.  Tom thrived on his ability to help, console, share positive life stories and give advice with his sly sense of humor and Irish smirk.

A private funeral mass and burial service will be held by the family.  A Memorial Service honoring Tom will be held on Friday, May 2, 2014, commencing at 4:30 p.m., at St. Mary’s Catholic High School, in the Virginia Piper Auditorium, located at 2525 N. 3rd Street in Phoenix, with refreshments to follow in the Thomas J. Reilly Library.  All those who knew, loved and respected Tom are invited to attend, celebrate and reminisce at the Memorial Service about the wonderful and extraordinary life of Tom Reilly.

Donations in Tom’s honor should be directed to the Thomas J. Reilly Emergency Student Fund, c/o Amy Lawrence, Director of Finance, and St. Mary’s Catholic High School at the address above. You may also feel free to contact Ms. Lawrence by telephone at (602) 251-2510 or via e-mail at alawrence@smknights.com.

Offer Hugs From Home Condolence for the family of REILLY, THOMAS J.